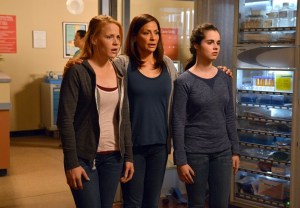 Warning: If you have yet to watch Monday’s Switched at Birth, avert your eyes. Everyone else, read on…

Monday’s episode of Switched at Birth delivered a tearjerker when Daphne and Bay’s father Angelo (Gilles Marini) died from injuries sustained in a car accident.

With an uncharacteristically angry Daphne laying the blame on her mother Regina (who threw some harsh accusations Angelo’s way before he drove off), TVLine chatted with executive producer Lizzy Weiss to find out how the teen will handle the loss moving forward. (One word: Spiral.)

Weiss also opened up about why Angelo was the one to go, and how Marini took the news.

TVLINE | Last time we spoke, you said it was really important to repair the relationship between Daphne and Angelo this season. Was that so you could break our hearts even more? Yes. [Laughs] It’s the toughest relationship and one of the most defining relationships of [Daphne’s] life, and it damaged her a lot that he left her. It profoundly hurt her. We really wanted them to mend that before he was taken away. You’ll see after he passes away, she has a huge turn, and the rest of the season is in direct relation to how she feels about the fact that she had so little time with him when things were good. Really for her, that is the spine of the season, the father-daughter relationship.

TVLINE | How did you come to the decision to kill off Angelo? What was the thinking in the writers’ room?
It started off by talking about iconic moments in all of our lives in high school. I went to an all-girls high school, and we actually never had a student die because I think girls are less likely to die in drunk driving accidents. We had a teacher die and it was such a seminal moment for me. When you’re a teenager and you feel death for the first time and someone you know is taken away suddenly… Everyone started talking about that moment. We actually started talking about, do we want it to be like that experience, someone random in the school, just so it could just be about death and what it feels like for the first time when you’re a teenager. Then we started talking about, “well, would it be more meaningful and interesting and complex to have it be someone closer?”

We went down a lot of paths and then we came across Angelo, and it was definitely a scary thought. I shied away for the longest time for all the obvious reasons — mostly losing Gilles, who I love and the fans love, and it’s obviously such a permanent decision. But every time I’ve been scared of doing something — like the all ASL episode, the dance episode and now this episode — it always paid off. I feel it’s risks like that that keep the show surprising and interesting. It was a very tough decision. But everyone will see that it’s not arbitrary just to kill someone. It definitely has meaning for everyone in a very deep way.

TVLINE | How did Gilles take the news? His storyline seemed to be beefing up finally.
A champ. I was so nervous to talk to him, and he was so gracious about it. He totally got it. He was excited for the journey because I explained to him he wasn’t just going to be sitting in a bed, that we were going to be doing flash forwards and flashbacks. I honesty think his work tonight is the best on our show. The fantasy flash-forwards were so sad, and I saw it so many times in the editing room, and every time I teared up at the wedding day and the birth of Bay’s fantasy twin because those are very iconic father-daughter moments. That was very important to me as a daughter, who has experienced both of those moments with my father, to talk about how sad it is that these characters will never have those moments with one of their dads.

TVLINE | This is obviously an event that affects many members of the family. But who would you say takes it the hardest?
Daphne. For sure. There’s no question. Everything about the rest of the season is Daphne’s response to losing this surrogate dad… Daphne becomes a very different Daphne for the rest of the season. She does some things that fans may not like and behaves in ways that will be very shocking. But she’s a teenager responding to a tragedy and she acts out. It’s a risk that even calls back the switch — because she’s so angry at Regina, and it reminds of her how she felt when she found out that Regina knew all those years and never told her. There’s old baggage for her. TVLINE | What about Regina? Is she going to feel the blame Daphne lays on her? Or is she going to realize Daphne is just in a lot of pain?
Both. At first, she decides to take the hits and wait it out as a mother might do. And then, as Daphne continues to punish her and make worse and worse decisions, it come to a head, which you’ll see later in the season.

TVLINE | And this was Bay’s biological father, so how is she dealing with it going forward?
Whereas for Daphne, it was all the time she lost being angry at him and wishing she could do it over again and not be as angry, for Bay, what we’re playing is the blood ties. She has a dad that she’s every close to, John. Angelo represents — just like adopted kids — all the questions you have about your biological ancestors. So we do play out, in an episode coming up, a yearning to get to know more members of her family that would tell her about parts of Angelo’s life that she can never ask about — his childhood, his adolescence, his twenties, [life] even before Regina. And so there becomes that craving to learn about him and her family. And as we move into Season 4 hopefully, those are questions we won’t stop answering. We’ll continue to play out what Angelo’s death means for Bay in other ways. As these challenges come up, it sort of haunts you.

Switched at Birth fans, what did you think of Angelo’s farewell episode? Are you looking forward to an angry Daphne? Sound off below!