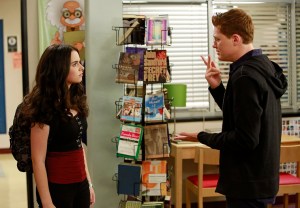 A night of passion for Bay and Emmett won’t lead to a happy morning after when ABC Family’s Switched at Birth returns Monday at 8/7c.

The one-time couple will be facing the tough reality of their steamy actions — like the fact that she did the unthinkable, cheating on boyfriend Tank — leaving them to wonder if they have what it takes to get back together, reveals executive producer Lizzy Weiss below.

TVLINE | Bay and Emmett had this beautiful, long-awaited moment, but it’s not without complications. What’s in store for them?
We pick up a few hours after the end of the [winter] finale, right away jumping into the reality of what would happen and all of the fallout. Tank has to be discussed and told, if need be, if that’s the choice she’s going to make. There’s the Matthew situation that has to be dealt with at school tomorrow. So there’s a lot on their plate. They have to figure out if it’s worth it [and also] if this was just a crazy moment or if it was real. And if it was [the latter], there are so many things backed up against them, can they work through them?

TVLINE | You just listed so many problems that they have to deal with. What would you say is the biggest issue for them?
The fact that Bay did the one thing she never thought she would do, which is cheat on someone, is the biggest issue. We really loved the idea that for 40 episodes, she had been stung and had this personal insecurity about being cheated on that we played out with Ty and even with Noah, who she felt like was stolen under her nose by Daphne. This has really become her thing. We just loved the idea of her doing it herself and having her come face-to-face with what it feels like to be on the other side. The fact that she cheated and is now having to face Tank is the biggest issue.

TVLINE | Whichever way it goes with Bay and Tank, he’s still around this season. So how does he fit into the picture?
Honestly, we just fell in love with Max Adler, and it seemed like the fans did, too. So we found great ways to weave him into our world. In really funny, unexpected ways, he interacts with a lot of people in our cast. The beginning of Season 3, he was pretty much in Bay land. We bring him out into the larger family.

TVLINE | How far will the Emmett and Matthew tension go? Will it continue to escalate?
We are going to explore [Matthew] more and get to the heart of some things a little bit more. The Matthew story is not over. TVLINE | Where does Daphne’s love life stand? How are things between her and Campbell?
This time around, the “other man” is her passion for the clinic and how seriously she’s taking her work and her future and school. We wanted to play that conflict that everybody has, balancing between your boyfriend or partner and what you do. That comes to a head for them. … She has to figure out what [she’s] willing to give up in certain relationships. She made this proclamation that she wants to be on the pre-med path, and that’s a pretty serious endeavor. Is she willing to do what it takes?

TVLINE | Last we saw, Daphne and Regina had a brick thrown at them through a window. How dangerous do things get for them?
That’s our big story. We did a lot of romance for Daphne last year. We wanted to pull her back to the family, to things that are going on at home. That is more what’s pulling her attention in the premiere, and the first half of the season is what’s going on with Regina and East Riverside and the tension there. It’s hard for her because she’s from there. It’s her neighborhood. She has feelings tied up, as well, in how the neighborhood feels about her mom being there. She’s torn. We have a big Angelo story, as well. Daphne and Angelo [are] coming together and being on the same side for the first time, wanting Regina to protect herself better. We really explore in depth this season Daphne and Angelo’s relationship.

TVLINE | How much of this season is about laying the groundwork for college?
A lot. A lot. Once we decided to do that, to graduate them, it became everything. Setting up their plans and then changing them and then landing on them, as kids do, is a huge part of the season and being true to all those iconic moments for the second semester of senior year.