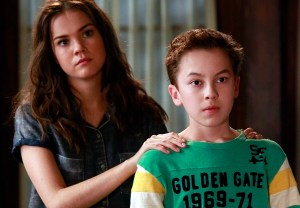 When The Fosters returns for Season 2 on Monday (ABC Family, 9/8c), Callie has no desire to seek out her biological father. Hard to believe, considering he’s played by Dawson’s Creek alum Kerr Smith, right?

However, circumstances will force her to confront the man she sees as just a “sperm donor,” describes star Maia Mitchell.

It’s a good thing then that she has boyfriend Wyatt to lean on for support. But a “hiccup” will cause some trouble for the young lovers, reveals Mitchell below. The actress also weighs in on Callie and foster bro Brandon’s feelings for each other.

TVLINE | How is Callie handling the news about her biological dad not being who she thought it was?
When the season picks up, you see her basically trying to figure that out. She’s not interested in knowing who this person is. If she had her way, she would never put a face to his name. She doesn’t want to open another door and not know what’s on the other side of it. For Callie, now it’s really about the adoption and how can we get this happening, especially now that Jude’s been adopted. She really sees the effect that it has on Jude, knowing that he’s been adopted and she hasn’t. That’s really where her head’s at. She’s not so interested in knowing who this Robert Quinn person is.

TVLINE | Kerr Smith is coming on to play Robert. What can you say about their dynamic?
Callie really isn’t wanting to know much about Robert. In her mind, it’s literally a sperm donor and that’s it. … But as she learns more about him, she realizes that it really wasn’t his choice. He didn’t abandon her. You see her very, very slowly soften and kind of warm to him, but I don’t think she really wants a father-daughter relationship at any point.

TVLINE | It’s a big deal for Callie to have to go through all of this. Is there someone in particular who becomes her support system in this journey?
You really see her and Wyatt’s relationship get stronger and stronger. He’s definitely someone that Callie feels like she can trust. Then the parents, Stef, especially, is someone that Callie has grown really close to now. It’s funny, if you look at the pilot, she was so threatened by Stef, and now they’re closer than ever. So Stef is a big person that she looks up to. Brandon even becomes this really strong support network for her, and Mariana as well. So she has the whole family backing her, which is a huge thing for her.

TVLINE | How do they feel about her biological dad? Do they have an opinion about whether she should accept him into her life or not?
Stef, in particular, is very protective of Callie. So you see her put her cop hat on. She’s very weary of the whole situation. The whole family wants her to be able to be adopted and be a part of the family. This whole Robert Quinn drama is not something that they want to keep around. Everybody just wants to get rid of it and move on.

TVLINE | Is relationship with Wyatt on solid ground? Are we going to see some issues come up for them?
You do see them on solid ground. You see them enjoying each other. It’s definitely young love. They have really strong feelings for each other. He’s such a great guy, and she trusts that he has her best interests at heart. But you will see a bit of a hiccup later on in the season. They’re starting to be more intimate, and as young people, they’re exploring their sexuality. For Callie, that brings up some stuff in her past with Liam. That physical threat, she still feels that whenever she’s intimate. That’s definitely something she’s going to have to address and work through moving forward to other relationships. You see a lot of issues from Callie’s past that she’s going to have to address. TVLINE | What about her and Brandon? Are there any lingering feelings?
This season, for both of them, is about letting go, moving forward. They access each other for support. Callie, at one point, refers to him as her best friend. They’re really trying to maintain that trust and that bond without it being romantic. It’s a little more difficult for Brandon than it is for Callie. You see him needing her permission to keep moving forward. He has a new love interest. So that’s really interesting, like how far he’ll go with that and what that brings up for Callie and him. You see them both really trying to give each other the permission to let go and keep moving on.