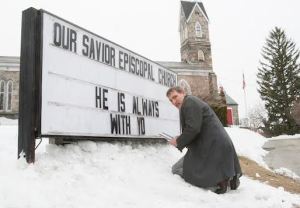 In this week’s serving of The Leftovers, Meg, Tom, Mayor Lucy — lotsa people go missing. But they haven’t joined the ranks of the Departed, they’ve just stepped away from the spotlight so that the series can dish out a Very Special Episode devoted to Christopher Eccleston’s Reverend Matt. And, in fact, it is pretty special. Read on, and I’ll tell you all about it…

BEAT IT | As the hour opens, Matt is encouraging his (tiny) congregation to join him in praying for a brain-dead little girl named Emily when a brute of a man storms into the church, pummels him and stuffs one of his accusatory flyers into his mouth. Yet, in spite of his injuries, the Rev refuses to press charges. “Occupational hazard,” he tells Garvey, who seems to be an old friend. Afterward, Matt pays a visit to Emily’s hospital room and is informed by an orderly that, against all odds, she’s woken up right as rain. Holy crap! The prayers worked, thinks Matt. At least until the orderly reveals that Emily recovered the night before his sermon!

GET LUCKY | Later, when not dodging calls from his bank or being stalked by the Guilty Remnant, Matt heads to a casino to investigate a tip about a Departed dad who supposedly gambled away his kids’ college funds. There, he spots — of all things — pigeons landing on a roulette table. Is it a sign? And if so, a sign of anything more than that the casino should keep its doors shut? For now, we don’t know. And Matt soon has a more pressing matter to attend to, anyway: The bank has received an offer on his church, and the only way that he can keep it is to come up with $1 more than is on the table — $135,000 — by EOD tomorrow.

MONEY CHANGES EVERYTHING | Desperate, Matt pays a visit to his sister, who, it turns out, is Nora. She agrees to give him the dough — her benefit cash from the disappearance of her family — but only if he’ll quit printing his tell-all pamphlets. No way, he says. So no way, she says. At a stalemate, he — to hurt her? Help her? — reveals that her husband was cheating on her. “It’s the one story I will never publish,” he adds as if that somehow lessens the sting. As you’d imagine, as caring as she is, she sends him packing without a check.

THE GAMBLER | That night at Casa Jamison, we learn that Matt’s wife, Mary (Janel Moloney), has been in a vegetative state ever since they were in a car accident on that fateful October 14th. Between this, the imminent loss of his church and his apparently fairly regular beatings, the Rev is at his wit’s end. “Help me,” he beseeches God. And then a light bulb goes off in his head, and off he goes to retrieve a peanut butter jar full of money left to him by Garvey’s father. (It’s The Leftovers — you just kinda have to go with it.) Laurie catches him in the act but agrees to remain silent (ha!) if he won’t tattle to her husband that she was hanging out in their backyard. Deal. Next, newly armed with $20k and knowledge gleaned from another sign — pigeons perched on a red light — Matt heads back to the casino, gambles at the pigeon-approved roulette table and boom! Wins all the money he needs to hold onto his church. Even though he gets mugged as he’s leaving, nothing will stop him — he attacks and, as far as we can tell, kills his mugger to retrieve his hard-won jackpot. All he has to do now is go to the bank in the morning. Easy, right? Wrong!

BORN TO LOSE | On his way to the bank, Matt sees a GR member get clocked with a rock from a passing truck and stops to offer assistance. Since no good deed goes unpunished, the truck returns, and its passenger hurls another rock at Matt. (This dude has amazing aim, by the way.) When Matt awakes in the hospital following a dream that involves everything from his parents’ fiery death to having sex with Laurie, he makes a beeline for the bank, only to learn that he’s too late — he’s been unconscious for days! To add insult to injury, he then discovers that the new owners of his church are… the Guilty Remnant!

OK, your turn. What did you think of the episode? Is there a limit to how much you’re willing to accept on the basis of “I don’t get it, but it sure is fascinating”? Hit the comments!