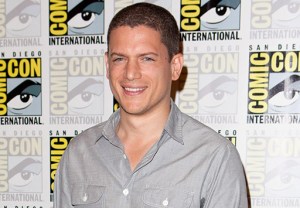 Heads up, Flash fans: A cold front is approaching Central City this fall.

Wentworth Miller (Prison Break) has been tapped to play Leonard Snart — aka the villainous Captain Cold — on The CW’s Arrow spin-off, making his first appearance in Episode 4.

The announcement was made Friday during the show’s panel at the Television Critics Association summer press tour, where the stars and executive producers were on hand to preview their “fast-paced” new drama.

Much to the delight of fanboys everywhere, The Flash is “probably the most faithful DC Comics adaptation ever,” said Geoff Johns, Chief Creative Officer of DC Entertainment, who will be breaking stories and working on the show throughout its run.

“We weren’t looking to do the same show twice,” said executive producer Andrew Kreisberg about spinning The Flash off of Arrow. “We weren’t looking for the same kind of hero that Stephen [Amell] portrays. We wanted someone more normal, who had greatness thrust upon them.” He said Grant Gustin was the first person to read for the role of Barry, and the team knew they’d found their star immediately.

Another sure casting was John Wesley Shipp — who starred in CBS’ short-lived ’90s Flash series — as Barry’s father. Executive producer Greg Berlanti had worked with Shipp on Dawson’s Creek and knew he wanted to get him on board in “one of the most important parts of the show.”

As for Robbie Amell coming on board as Ronnie Raymond — one half of DC Comics character Firestorm — reporters were quick to wonder whether Firestorm’s other half, Martin Stein, will also be making an appearance. Berlanti revealed that Stein was initially in the pilot, but was eventually written out. That said, we will meet Stein as Amell’s character evolves.

Barry’s suit was also a point of contention, as it’s not quite as vibrant as in the comics. Berlanti noted that designer Colleen Atwood went through a series of different looks and that the team will be “evolving the suit over time. … It will become more vibrant and red” as the series progresses.

And despite joking about “starting a Kickstarter” to keep The Flash‘s production values consistent with its splashy pilot, Kreisberg said the team is “hoping we’re going to be able to maintain the same level of action and adventure and excitement. So far … we feel like we can.”