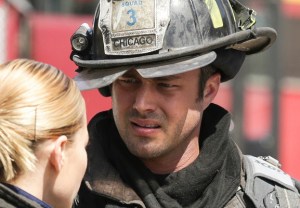 So went Chicago Fire‘s Season 2 finale, which saw a burning building explode with almost the entire cast of characters inside of it.

With an eruption that huge, “someone has to die. [And] someone does,” executive producer Matt Olmstead tells TVLine.

RELATED What Happens Next: Is The Blacklist‘s Red Really Liz’s Father?

As a result, the catastrophic event has “a lot of ramifications in terms of not everybody makes it, and those who do make it, their lives take some turns because of it,” teases the EP.

So who does not emerge out of the rubble alive? In previewing the aftermath for Firehouse 51’s bravest, Olmstead ruled out some possible casualties. Severide, for one, will deal with the consequences in a possibly self-destructive manner.

“As we’ve established on the show, he’s prone to going off on his own and having a few cocktails when things don’t go his way,” describes the EP. That in turn, “might cause a problem with him and [Chicago P.D.‘s] Lindsay. The thing we like about him and Lindsay is they’re cut from the same cloth. They don’t judge each other. No one’s ragging on the other person for not being available. They’re really similar.”

But with Severide in a “separate headspace” because of the explosion, “there’s a complication going forward” with the couple. (Another pair, however, looks likely to be getting engaged.)

One of the other characters facing a “big turn” in the wake of the destruction is Mills, so we can put him on the Survivors List. And the presence of Yuri Sardarov, who offered the following teaser at NBC’s TCA Summer Press Tour party, also bodes well for Otis: “The cliffhanger is going to force a few things into perspective, and everything is going to be revealed in the first episode. I just read it, and I was tearing up. It’s beautiful. It’s incredible.”

So now that you have all the evidence, rewatch the explosive moment below, then review our poll options and share your predictions for who will be saying goodbye.