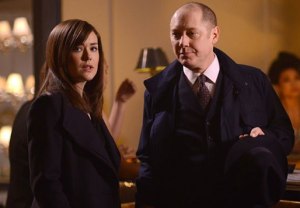 The freshman finale of NBC’s The Blacklist left viewers with some serious daddy issues.

After much speculation that Ray Reddington may, in fact, be Liz Keen’s father, the season’s final minutes showed Red’s back covered in burns — strongly suggesting that it was he who saved a young Liz from a devastating house fire.

But despite Red’s metaphor-laced warning to Liz in the season finale — that her father “died” when he saved her from the flames — Red’s scars don’t necessarily indicate he’s related to her. If the answer were that easy, Big Bad Berlin likely wouldn’t have played such a key role in the season’s final arc.

Could it be that Berlin (as many suspect) is Liz’s grandfather, and that her mother was romantically involved with Red years ago? (Which then begets the question: Who is the mystery woman whose photo Red and Berlin both possess?) And if Red isn’t related to Liz, is he truly the father to a young ballerina who appeared briefly in Season 1?

Review our poll options below, then make your predictions for The Blacklist’s sophomore season.