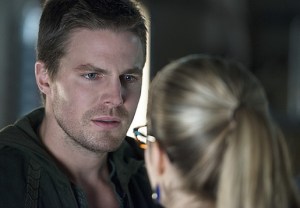 After Greg Berlanti appeared at the Television Critics Assoc. summer press tour to tout the new NBC drama The Mysteries of Laura, TVLine reached out to the uber-producer to solve the mysteries of Arrow Season 3.

PHOTOS Stars From Arrow and Other Shows Go Back to Work!

Echoing that which series lead Stephen Amell shared with TVLine at the may Upfronts, the Arrow EP said that the next Big Bad will “feel different” from Season 2’s Slade Wilson aka Deathstroke. That said, the incoming adversary “has some personal elements of connectivity to Oliver, which we’ll learn about” — in part via flashbacks, Berlanti allowed. “Hopefully, fans of the DC Universe will be really pleased by who it is.”

Speaking of the show’s flashback device, Berlanti said that Season 3 will “not just flash back from Oliver’s perspective.” As the hit drama has done on rare occasion with the likes of Laurel and Diggle, “There’s some backstory stuff that’s going to come out for some of the other characters.”

One provocative Season 3 plot point that will very much take place in the here and now, meanwhile, involves Oliver, a certain blonde beauty and the popping of a question.

As revealed in the official logline for Season 3, “with Arrow now a hero,” crime down in Starling City and while “basking in his success,” “Oliver believes he can finally have a private life and asks Felicity (Emily Bett Rickards) out on a date.”

Berlanti told TVLine that rather than standing alone as a brief blurb within a larger logline, there’s a “better context” for the proposition in question.  But yes, it is happening.