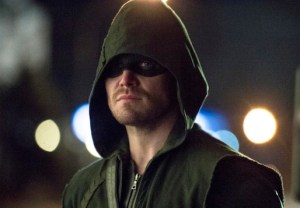 TV’s own Green Arrow will not pop up in the highly anticipated Batman V Superman movie, the CW series’ star made clear on Thursday.

Stephen Amell used his Facebook page to snuff the speculation, which started when word spread that other DC Comics heroes would first make cameos in the Dark Knight/Man of Steel mash-up (starring Ben Affleck and Henry Cavill and swooping into theaters May 2016) before populating a Justice League movie (targeted for May ’17).

The Arrow “crossover” theory then amplified when Amell himself teased “big things” to be revealed at the San Diego Comic-Con later this month.

RELATED Gotham to Premiere at Comic-Con — Plus: Arrow, Flash and More Previews

“I appreciate all the support and enthusiasm, but not everything I post is a cryptic indicator that I’m going to be in Batman V Superman. I’m not going to be in Batman V Superman,” Amell wrote. “The next time that I either do a video or an interview with a journalist that I like, I’ll be happy to explain why this is the case. Short form: It’s not a barometer on ability or the quality of genre…. Everything here boils down to logistics.”

Amell then enthused that “playing Arrow on television isn’t a consolation prize. We play the definitive versions of our characters in the DC Universe.”