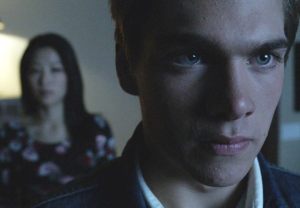 If Monday’s Teen Wolf is any indication, teaching Liam the ways of the wolf will be easier said than done. Much easier.

Fresh off last week’s big bite, Scott and Stiles did their best to wrangle the rambunctious — and understandably anxious — new beta, but not even duct tape could solve their problem. (And as we all know, duct tape solves everything.)

And that’s when Liam learned a valuable life lesson: When a bunch of older high school kids invite you to a cool lake-house party, there’s a good chance they’re merely trying to lure you into the basement, where they intend to chain you up and prevent you from wolfing out.

HERE’S DADDY! | Fortunately, just when things seemed their bleakest, Papa Argent emerged from the shadows and saved Scott from Liam’s wolf-y grip. It was a glorious re-entrance, like when Gandalf returned atop a mighty white steed in the Lord of the Rings trilogy — only with slightly less beard. He looked so proud watching Scott take li’l baby Liam under his furry wing: “You’re not a monster. You’re a werewolf like me!” (Oh, screw it. We were all proud of that.)

KILLER REVEAL | Mr. Mute — I call him that to make him less terrifying — tried crossing another name off his dead pool by attacking Peter with his trusty tomahawk. But the truly unexpected twist came when the Beacon Hills Police Department actually managed to crack the Benefactor’s code and figure out that there’s a paid assassin on the loose. Derek even helped Sheriff Stilinski track the mouthless lunatic to Beacon Hills High, but thanks to Peter’s impeccable timing and insatiable need to kill, they didn’t get much intel out of him.

Had they gotten him to talk — despite his lack of a mouth — they might have learned that Liam’s buddies Garrett and Violet are actually assassins working for the Benefactor. (Ugh… freshmen, right?)

VOICES IN MY HEAD | Unlike her fellow pack members, Lydia decided to actually learn from the past by figuring out why she was inexplicably writing in code last week. The verdict? Our girl might be totally losing her mind, Stiles-style. Following an entirely inaudible exchange with Liam’s buddy Mason, Lydia started hearing muffled voices — and seeing muffled faces — through the wall. She used that to crack the code (Allison!!!) and uncover the entire dead pool, which of course, includes everyone in Scott’s pack. THE POWER OF STILES | But Liam wasn’t the only one fighting off a change this week. Stiles also bore witness to Malia exhibiting all fifty shades of cray as she wolf’d out and waxed poetic about crushing his bones. Stiles was, of course, the perfect gentleman throughout the whole process, but it made me think back to when Shelley Hennig discussed Malia’s philosophy as Stiles’ new girlfriend: “She’s more likely to punch him; that’s her way of showing love.” Yeah, that sounds about right.

Teen Wolf fans, were you surprised to learn that Garrett and Violet are assassins? Who do you think will be the next to die? Drop a comment with your thoughts on this week’s episode below.