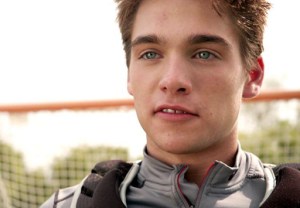 After months of (social media) fanfare, Dylan Sprayberry‘s Liam finally showed his face on last week’s Teen Wolf — and wasted no time getting mixed up in Beacon Hills’ supernatural drama.

Below, Sprayberry gives TVLine a taste of what’s to come for Liam, and how well he’ll fit into Scott’s tight-knit pack. (Plus: Liam may be able to hold his own against a wendigo — but will Sprayberry fare as well against Teen Wolf fans?)

TVLINE | The wait is finally over. I feel like MTV has been hyping Liam up for months now.
Yeah, they have been. They’re really good at it, too.

TVLINE | The fans have been excited, too. How aware were you of this show’s fandom before you started?
I wasn’t expecting the response I got. Dylan [O’Brien] and Tyler [Posey] told me all about them.

TVLINE | Did they give you any pointers?
They were just like, “Our fans are crazy, so say funny stuff and don’t say anything that’ll make the show or yourself look bad.”

TVLINE | Of course. Now, we’ve met Liam as a human, but how is he going to react to this major change in his life?
It’s definitely going to be a problem for him. Being in a public high school as a freshman, everything changes. It’s a different game than middle school, which is all fun and games. It adds another thing to that problem of having to fit in. And it’ll be even harder for him to fit in now that he knows all about the secret supernatural stuff.

TVLINE | I spoke with Shelley Hennig about trying on her fangs and claws for the first time. How was your fitting?
Oh, I can’t say anything about that.

TVLINE | You can’t talk about being a wolf?
No, because we don’t know [if he’s a wolf] yet.

TVLINE | Hmm… OK, we’ll just say he knows about all of the supernatural goings-on. Is he going to integrate himself into Scott’s pack?
He does get to meet everyone. The whole pack gets involved with him. Obviously, Scott tells the pack about what he did and that he’s ashamed of it. Scott feels really bad about it.

TVLINE | Is Scott going to become a mentor of sorts for Liam?
Definitely. That’s the kind of person Scott is; he’s someone who helps people. He also takes [responsibility] for it. He has to explain to Liam what happened what’s going on in this crazy town. Scott definitely doesn’t abandon him.

TVLINE | Being a part of a supernatural show is new for you. How was filming that first episode with the wendigo battle?
It’s totally different when you’re acting scared because someone has a gun pointed at your face. It’s hard to get used to being scared by a werewolf or a wendigo, because that’s not a normal human thing. TVLINE | Outside of the pack, Liam has a few human friends — Garrett, for example, we met last week — so how is this big change going to affect his friendships with them?
He doesn’t tell any of them about what happened or what he’s seen, because he can’t. It’s not his secret to tell, it’s Scott’s, which is a really hard thing for him. We’ll get to see him struggle with that along the way.

TVLINE | What about romance? Is anyone catching Liam’s eye this season?
Not this season, not so far. But maybe sometime in the future. Maybe sophomore year.

TVLINE | Yeah, wow, I keep forgetting Liam’s only a freshman. You’re the only real teen on Teen Wolf right now. Are you having a different experience, being younger than the rest of the cast?
Yeah, I actually just turned 16 a few days ago. It’s not weird because I hang out with adults a lot. And Dylan and Tyler … they don’t act immature, but they definitely act like teenagers. They have the same interests as I do, and they don’t make it feel like there’s any separation between us.

TVLINE | Are you looking forward to driving yourself to set someday?
Oh, yes! I wish I’d started studying for my permit last year; I’m just starting now and I won’t be able to drive until next year. … I don’t think my mom was ready for me to start practicing yet.

Teen Wolf fans, what are your early thoughts on Liam and his place in the pack? Any hopes for him this season? Drop your every thought in the comments section below.