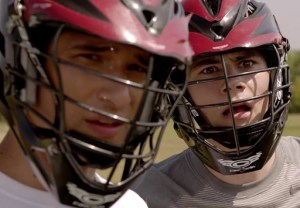 The mysterious “Mute” reared his mouthless head on Monday’s Teen Wolf, introducing yet another word for fans to add to their Season 4 vocabulary: Wendigo!

We’ve seen this toothy jerk pop up on other shows — Wendigos have had memorable stints on Supernatural and Charmed, for example — but like with most things, the beastie was given a very special Teen Wolf twist. (And by “very special,” I obviously mean very sexy). The creature was born from an unsuspecting shirtless bro named Sean, the only member of his family to survive a grizzly assault by the Benefactor.

Sadly, Sean’s time in Beacon Hills was short-lived, as the Mute offed him during his battle with Scott — looks like Sean and his family were all on the Dead Pool — a scuffle that forced Scott to bite Liam, a freshman lacrosse player at Beacon Hills High. (And that, children, is where betas come from). TEEN WOLF: THE NEW CLASS | OK, let’s talk more about Liam. He’s one of the two new lacrosse players we met this week, along with fellow freshman Garrett; and while neither began the hour as supernatural creatures, they both appear to possess super-human lax skills — along with an uncanny ability to annoy Scott and Stiles. (And I loved Stiles’ assertion that Liam must be some sort of werecheetah. “Is that a thing?”) At least someone managed to surprise Coach this week, even if that someone ended up being Kira.

SKIRA TIME | Speaking of Kira, the eternally awkward fox got some good news (for a change) this week, as she and Scott finally DTR’d. (Well, not in so many words, but that kiss spoke volumes.) Her cute interactions with Scott were actually a nice change of pace from the episode’s darker moments, but here’s my question: Where is Kira going to live when her parents inevitably move away from Beacon Hills? Come to think of it, with Isaac gone — was anyone else surprised that he was actually mentioned this week? — there’s a room available at Chez McCall! STUDY BUDDIES | Malia Tate may be struggling to survive math class, but if she was graded on her kissing — and on this show, I feel like that could become a thing — she’d find herself on the honor roll in no time. Say what you will about the suddenness of “Stalia,” but the couple’s little studying sesh was nothing short of adorable. Also, how great was Stiles’ explanation why math is essential? (“Knowing how much to tip at restaurants.”) As someone who’s been in the “real world” for a few years now, I can confirm: that’s all you need math for. Don’t listen to Lydia.

LYDIA | In addition to her math skills, this week’s episode also explore Lydia’s banshee powers a little bit — but more importantly, am I the only one who got major sexy time vibes from Lydia and Deputy Parrish? Maybe it’s just because Lydia has chemistry with everyone, but their talk of her “reputation” got me all hot and bothered. Still, I’m trusting executive producer Jeff Davis, who told TVLine that Lydia’s love life is being put on the back burner this season. BOOTY HUNTER | Despite the Hales’ major money problems, Peter and Derek hired Braeden to help track down Kate. Of course, Derek appears to be getting a little more than he paid for, unless there was another reason Braeden was seen putting her clothes back on in Derek’s loft. (Update: Braeden was apparently just slipping back into her normal clothes, but I’m not ruling out a future for those two.) That said, I’m definitely worried about Braeden; few women have slept with Derek and lived to tell the tale. (Also, still no word on why Derek’s eyes are gold.)

OK, let’s talk: What did you think of this week’s Teen Wolf? Any initial thoughts on Liam and Garrett? Drop a comment with your review of the episode below.