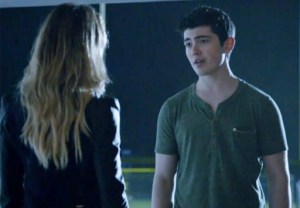 Monday’s Teen Wolf revealed an important, albeit super-ironic, lesson: Despite the show’s title, none of the characters are in any way equipped to deal with an actual, real-life teenager.

17 AGAIN | That teenager, in this case, was Derek, who had been magically Benjamin Button’d by life-ruiner Kate Argent. First, things got crazy, as quick-healing Derek attacked Deaton and Lydia. Then they became sad, as Lil D revisited his childhood home, unaware that most of his family members were turned into supernatural s’mores years ago. Lastly, things turned statutory, as Kate invited Baby Blue Eyes into the bone zone. Seriously, I don’t even have words to explain how gross it was watching Kate get all up in young Derek’s business. It was like watching a teenager on The CW (like, mid-to-late 20’s) kissing a teenager on Degrassi (like, early-to-mid teens). And I don’t care if it was all part of Kate’s plot to get the triskelion from the vault below Beacon Hills High; there had to have been another way.

DADDY ISSUES | But Kate and Derek weren’t the only ones who shared an uncomfortable reunion this week. Malia finally came face-to-face with Papa Peter (aka “Satan in a V-neck”), and it was just as awkward as Shelley Hennig told TVLine it would be. During their brief encounter, he was being less “daddy” and more “daddy,” and I didn’t like that. Not one bit.

MONSTER MASH | Scott and the gang had their first encounter with the Berskerkers this week — I guess it was technically their second, but they didn’t know what they were facing in the desert — and it did not go well. The Shredder look-alikes made quick work of Scott, Kira and Malia, and were it not for Derek’s sudden growth spurt, the entire pack would have been donezo.

Peter’s battle with Kate also didn’t go according to plan, as their face-off was interrupted by a mysterious figure with exceptional taste in footwear — The Benefactor, perhaps? — and now Peter is out $117 million. Has anyone ever lost such a large amount of money in such a short amount of time? It was pretty much the sexiest Ponzi scheme ever.

Questions I still have after tonight’s episode:
* What is a Berserker?
* How did Derek turn back into a grown-up?
* When will Lydia’s powers become useful?
* And most importantly, will Stiles ever get to be the big spoon?

Teen Wolf fans, what are your lingering questions after tonight’s episode? And do you have any answers to mine? Drop a comment with your thoughts. Together, we can make sense of anything.