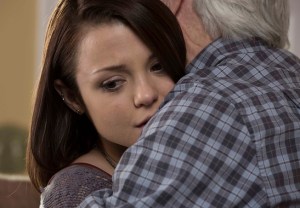 While we all might wish that at some point when relatives are driving us nuts, in MTV’s new series Finding Carter, it becomes a nightmare reality when the titular heroine discovers her “mom” kidnapped her. Now, she’s forced to live with her “real” family — but you don’t have to, so will you stick with them?

Before you chime in with your thoughts on Tuesday’s premiere, a recap of just the pilot (MTV also aired Episode 2 tonight): Carter (played by Kathryn Prescott of Reign and the UK’s Skins) and her mom Lori (Rescue Me‘s Milena Govich) are Gilmore Girl-esque BFFs, but Lorelai didn’t snatch her daughter at age three from another family. The truth comes out after Carter, née Linden, gets picked up by the cops for teenage tomfoolery and Lori never comes to get her from the police station. The teen is in shock and given almost no time to process the information before her real, crying parents show up to take her home. Now, having Alexis Denisof (Buffy the Vampire Slayer, Angel) as your father might not seem so bad, but his David is hiding something: He’s looking at foreclosure unless he seizes the opportunity to write a follow-up to his bestseller Losing Linden. His pushy literary agent even has a title: Finding Carter. However, those secrets are nothing compared to those of his detective wife, Elizabeth (Lost‘s Cynthia Watros), who’s having an affair with a colleague, and is intent on bringing Lori to justice, much to Carter’s dismay.

Carter also discovers she has a straight-laced twin sister, Taylor (Contagion‘s Anna Jacoby-Heron) — naturally, the girl is into her male best friend, but he’s entranced by the free-spirited Carter — and a younger brother named Grant (Zac Pullam), aka the self-proclaimed Replacement Child.” While Carter was having a great life, Taylor never did anything fun “because I lived in constant fear of the terrible thing that happened to my sister — except it didn’t,” she says before promptly getting drunk at a party.

Elizabeth blames Carter’s “bad habits” for Taylor’s inebriated state, causing her lost daughter to unleash her true feelings: “You’re stiff. You’re humorless. You’re a control freak. You operate from this place of fear. My mom used to tell me every day that she loved me, and I haven’t heard you say it once, not to any member of your family.”

Things get worse when Carter stages a very public display of her whereabouts so Lori can find her. Lori does show up incognito, but (conveniently) doesn’t have time to explain anything before Elizabeth arrives to arrest her and she has to bail. “She’s my mother, and you’ve taken me away from her. Want to find my abductor? It’s you,” Carter tells Elizabeth.

The pilot strikes a nice mixture between an ABC Family drama — down to the “new kind of family” feel and the presence of The Fosters‘ Alex Saxon as Carter’s ex Max — and a Lifetime movie. Prescott, who was terrific as Skins‘ Emily, is equally winning here, and it’s always nice to have Denisof on TV. The only element that doesn’t quite gel is the character of Elizabeth. I never bought into her secret pain that left her dead inside, so she just comes off like the cold bad guy that Carter sees her as.

What did you think of Finding Carter? Grade the premiere via the poll below, then hit the comments to back up your pick.