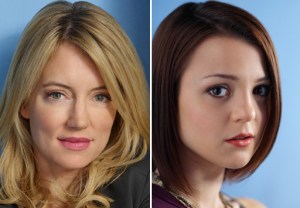 You’ve never seen a mother-daughter relationship quite as complicated as on MTV’s Finding Carter, premiering Tuesday at 10/9c — and that’s exactly what stars Kathryn Prescott and Cynthia Watros love about their new gig.

Here’s the drama’s plot in a nutshell: After discovering that her “mom” is actually just a woman who kidnapped her as a young girl, Carter Stevens (Prescott) is reunited with her biological family, including her biological mother Elizabeth (Watros).

“This lovely rainbow tornado comes into our lives again, and we welcome her, but it shakes everything up,” Watros tells TVLine. “Elizabeth tries desperately to reconnect with this daughter that she hasn’t seen in 13 years. I think they’re more alike than they both want to admit, so they definitely clash.”

But while this all sounds heavy — and, to be fair, it is — Prescott insists that Finding Carter isn’t all gloom and doom. “The first episode is really intense, because it’s like the rug is pulled out from under her, but after that … there a lot of fun moments,” Prescott explains.

For Elizabeth, however, the abduction drama consumes nearly every aspect of her life.

“Not only is Elizabeth a detective that wants to get this criminal, but more importantly, she’s a mom who lost years with her child,” Watros says. “She has to reconnect with Carter, who was essentially brainwashed. [The abduction] is always circulating with Elizabeth.”

Elizabeth will gradually become closer to her estranged daughter, but don’t expect Carter to start calling her “mom” anytime soon.

“Carter is grieving her mom, or the woman she’s always called ‘mom,'” Prescott says. “It’s like torture. The closer she lets Elizabeth get to her, the more she feels she’s like [her kidnapper] Lori get away.”

(Stockholm Syndrome doesn’t even begin to describe it.)

Will you be checking out the series premiere? Drop a comment with your early thoughts below.