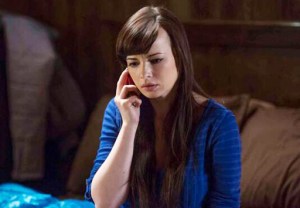 A breakup, a reunion and a possible pregnancy all in one episode? Needless to say, we had a million questions after last night’s Awkward midseason finale.

Fortunately, showrunners Mike Chessler and Chris Alberghini were more than happy to answer every last one of them — including whether or not that was a real pregnancy test in Eva’s hand at the end of the hour.

Let’s begin, shall we?

TVLINE | How long did you know you were going to make Eva a sociopath? Was that always the plan?
ALBERGHINI | We knew right away that we wanted to bring in a character that would stir things up and create conflict. Pretty early on, we figured out what the endgame was, the logical extension of brining her in. What is she trying to do, and what does she ultimately want? They all want to fit in at that age, so we thought, “How can we make the biggest version of someone wanting to do that? And how far might someone go to fit in?”

TVLINE | Moving forward, will she be known as “Eva” or “Amber”?
CHESSLER | It depends who’s referring to her. [Laughs] That’s what we’ll see going forward.

TVLINE | I’m sure you’re aware that Eva isn’t the most well-liked new character. Can you explain her a little bit?
ALBERGHINI | These kinds of people, and I feel like I’ve met some of them in real life, come from a place of deep-seeded vulnerability and wanting to belong. I hope people don’t just villainize and hate her, but realize she’s actually a vulnerable, damaged person. She’ll do anything to get what she wants, and on some level, people do that all the time.
CHESSLER | Also, let me say this about Elizabeth Whitson … We saw a lot of girls for that part, and we were so blown away by what she did with it.
ALBERGHINI | She’s a lovely girl and a talented actress, and she should not be confused with her character. TVLINE | Honestly, I was expecting a Lacey pregnancy reveal. Is that ever something you’d do?
CHESSLER | We’re open to all story possibilities, and I think that’s the most I’d want to say about that.

TVLINE | Anything else you want to clear up about the Eva situation?
CHESSLER | A lot of people on Twitter were asking why Sadie didn’t just show Matty the pictures of Eva’s bedroom, and that wasn’t exactly clear because we had to cut a scene from the episode. When Sergio and Sadie were in Eva’s bedroom, they were actually interrupted by Eva’s grandmother. They had no idea she followed them in there, and she startled them so they had to rush out. I’d like fans to know — and I’m sorry about it — that Sadie and Sergio were only in Eva’s room for a few seconds and didn’t get enough shots to totally turn Matty against her.

TVLINE | When Season 4 picks up in the fall, how does Jenna feel about Luke? Is she trying to win him back, or is she just trying to move on?
ALBERGHINI | We’re going to pick up not long after the midseason finale. I think she’s trying to figure out what to do next. She has feelings for the guy, and she knows it was not her finest hour when she tried to protect Matty. That said, she and Matty do have a friendship, so in many ways, she was justified trying to protect him. We’re going into 4B with Jenna evaluating her priorities: Matty, Luke, senior year, finals. TVLINE | I’m glad Jake and Tamara are friends again. Any chance they’ll try to be more than that?
ALBERGHINI | We think it’s interesting to revisit relationships with people you’ve had a romantic connection with. What happens next? Do you get back together? Do you stay friends? We’ve done it a lot with Matty and Jenna, so now we’ll see how that looks with Jake and Tamara.

TVLINE | Theo and Cole got tons of screen time in the finale. Will they stay in the forefront, or return to the shadows?
CHESSLER | They’ll definitely be around. We have a lot of characters for a half-hour show, and we’d love to have them around as much as possible. They have a lot of fun stuff that happens over Spring Break, which we’re shooting now. They cause a lot more trouble in the second half of the season.

Awkward fans, did that clear up your confusion about the midseason finale? The fall is a long way away, so drop a comment with your thoughts on last night’s big twist below.