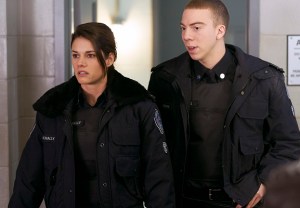 On Thursday’s Rookie Blue, Duncan lets Andy down at the worst possible time, someone wants a little lovin’ — if you catch our drift — and another cop dabbles with the dark side.

DUNCAN FAIL RATING | On a scale of one to 10, most definitely a 10. Andy worries that she’s being too hard on her rookie, so Oliver advises her to cut him some slack. Unfortunately, with Duncan, “once the behavior is set, that’s pretty much how it’s going to be.” Those are his own words. Granted, they’re about a former criminal, but they very much apply to the newbie. So Duncan’s poor police skills and cowardice are here to stay, which is very bad news for Andy. When he wonders why they aren’t waiting for back-up before entering a building with a possible shooter, Andy replies, “That’s why we have partners.” But with a partner like Duncan, you’re better off waiting for back-up. Andy finds herself in a house with a child when a gang boss enters with a gun, looking for the kid, so she calls Duncan for assistance. But he just sits there in the car, trying to psych himself up, before turning off his radio. “Duncan, where are you?” a frantic Andy asks. “Please respond! I need you! Now!” Later, he spills some lies to her about getting turned around – you were around the block, dude! – and his radio battery dying. She knows it’s BS, and Duncan is suspended pending investigation. See ya!

‘McSWAREK’ UPDATE | Traci comments that Sam has been in a good mood ever since he and Andy rekindled things. “We’re not back together. We have agreed that we’re friends,” Andy corrects her. Wait, we’re back to that? “Just friends” was definitely not the impression I was getting. “I’m trying to be smart about the fact that we didn’t work together for a reason,” she continues. While her head tells her “we’re a very bad idea,” Traci knows her friend’s gut says something else. And the flirting in the break room is proof of that. Then Sam comes through for Andy when she’s doubting herself after the Duncan incident. “You’re one of the best I’ve ever seen,” he tells her. “You had a feeling about this guy and you were right. You’ve got to trust that. I think you’re feeling the way you’re feeling because you believe in people and you know they can be better. It’s what makes you who you are.” And that’s what makes Andy lean in and kiss him. NICK: SEX THERAPIST | Chloe pesters Nick to find out why Dov hasn’t touched her since the hospital. Yes, it’s as awkward as it sounds. Nick tries to bring it up with Dov, tiptoeing around the issue, before eventually blurting out the truth. “She talked to you about that?” Dov asks, to which Nick replies, “I’m not thrilled about that either.” Dov explains that he’s worried she might be fragile after almost dying, but Nick reassures him, “She’s ready. Believe me.” Seriously, Dov, Chloe is not subtle about these things.

DOPIN’ AND CRYIN’ | Chris has a storyline! And it’s seriously messed up. The once clean cut cop meets up with a cute, but sketchy dealer for some of the “same as the last time.” So Chris has been doing drugs for how long now? Meanwhile, Gail connects with a victim — eventually. First, she just tries to brush it off, complaining about how the woman bled all over her and needs to pay for her dry-cleaning. But when the women dies, Gail finds out she has a daughter and breaks down crying.

Rookie Blue fans, are you glad Duncan finally got the boot? Are you ready for Andy and Sam to stop playing games? And are you excited for dark Chris?