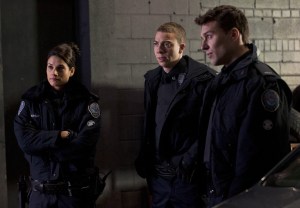 Fite Nite is back on Rookie Blue, but the one who should be punching chickens out, leaving another officer to step up on Thursday night’s episode.

And yet, despite all the hits being thrown around, it’s Gail who gets really hurt.

A SECOND OPINION | Gail can’t make it to Fite Nite because she’s meeting Holly’s friends for the first time at The Penny. Dov suggests that her “ambiguous sexuality” might make Holly’s pals think that she’s not serious about the relationship. For someone who’s not even part of the couple, he sure has a lot of opinions about them. “I think about you two all the time,” he says before quickly adding, “That came out wrong.” Gail’s response: “You came out wrong.” That’s just the first of many fun Dov/Gail exchanges in the episode – Gail thinking Duncan’s name was Jeremy was another beauty — all of which make me wish they’d partner these two up more. Gail tries to explain to Dov what’s so great about her relationship with Holly. They don’t have much in common, but that gives them more to talk about. They don’t even fight. “It’s just different. I’m different. I’m…better maybe,” she realizes somewhat horrified. Too bad the meeting of the friends doesn’t go so well. Gail overhears one of the women calling her just a beat cop, someone simple and uncomplicated to have fun with. “Do you think I’m a blue collar?” Gail confronts Holly. “That I’m out of your league?” Personally, I don’t think there’s a less blue collar cop alive than Gail. Even if she is a cop, she’s police royalty. Gail is so upset, she heads to Fite Nite by herself and gives a nasty officer she encountered earlier a trip to the dentist.

BATTERED HEARTS | Sam’s back at work, but relegated to light duties. “Place looks different somehow,” he says to Andy, who responds that maybe it’s him. “Here’s to new beginnings.” Hmm, a hopeful sign for “McSwarek” after last week’s doubtful ending? Things are less great for Andy’s ex Nick, who finds a second wind during his fight with a muscular rookie after he sees her and Sam together. But he still gets his “ass kicked.” “At least I tried,” he tells a concerned Andy during a loaded conversation. “So what, if you’re going to be in the game, you’re going to get hurt?” she replies. And then, perhaps most painful of all, he says coldly, “You have a good night, McNally.“

MARKING ONE’S TERRITORY | While working the commissioner’s Project Accountability operation — confiscating items purchased with dirty money — Dov runs into Chloe’s husband, Wes. The two basically have a pissing match over who gets to claim the contents of the house they’ve both been assigned. Dov agrees to give him the big items, but he takes the credit cards that lead to a bigger bust. Later, Dov tells Wes he doesn’t know a good thing when he sees it, but clearly, they’re not just talking about work. “You scared her,” Dov says, while Wes claims he was just protecting Chloe. “It’s over, Wes. Let it go.” So can they get divorced now?

DUNCAN FAIL RATING | Seven because Nick’s nice face gets messed up due to his cowardliness. The rookie was supposed to be the one fighting, but when he saw his opponent, he freaked out and started making up excuses about hurting his shoulder.

Rookie Blue fans, what did you think of the Fite Nite drama? Craving more of The Comedy Stylings of Dov and Gail? And are Sam and Andy taking things too slow?