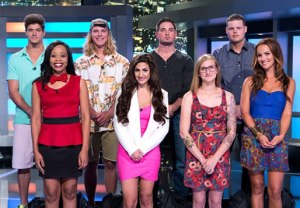 There’s a reason why Big Brother has held onto its signature “Expect the unexpected” catchphrase for 16 seasons.

After Wednesday’s debut introduced some of the franchise’s most superficial, polarizing contestants to date, it was hard to believe that Thursday’s second batch of contestants could be any less appealing.

But in the spirit of CBS’ reality series, there’s always a twist. And on the second night of BB‘s two-part premiere, we learned that some of these new contenders could, in fact, be worse than the group we met just 24 hours prior.

Once again, let’s first break down this group of contestants, high school yearbook-style:

MOST LIKELY TO BE DISQUALIFIED FROM THE SHOW: ZACH
Every few seasons, there’s a contestant who just can’t keep his cool long enough to get evicted the traditional way, opting instead to get escorted out by the producers for threatening a housemate/destroying equipment/something equally as absurd. This season, my money’s on Zach, who needn’t say anything more than this lovely sound bite to seal his fate as the season’s house jerk: “I’m annoyed by people who eat, people who sleep, people who breathe, people who live.” Smooth talker!

MOST LIKELY TO GET EVICTED FIRST: CHRISTINE
The 23-year-old barista was utterly precious as she cried upon receiving her BB house key. But her poor showing in the HoH competition (more about that in a minute) and general wouldn’t-hurt-a-fly demeanor make her a lock for an early eviction.

MOST LIKELY TO OPEN PANDORA’S BOX: BRITTANY
She didn’t get much screen time during Thursday’s second hour, but it seems this modest mom of three wouldn’t be able to resist, say, a phone call from home?

MOST LIKELY TO MAKE OFFENSIVE REMARKS: CALEB
I’ll admit, I’m cheating a bit on this one: Prior to the Season 16 debut, Caleb was already making headlines for racist and homophobic comments. Now that we know he’s ultra-conservative and doesn’t back down from a challenge, I’d be unsurprised to see Caleb joining the Big Brother Hall of Shame.

MOST UNEXPECTED TOP 3 FINALIST: HAYDEN
Much like the Season 12 champ also named Hayden, BB‘s resident pedicab driver is refreshingly laidback, with just enough physical prowess and street smarts to help him coast into the finals — without anyone knowing how he got there.

MOST LIKELY TO BECOME A HAVE-NOT — AND HATE IT: VICTORIA
As this Florida-based photographer so charmingly puts it, “Victoria gets what Victoria wants.” But in the event that Victoria doesn’t have the privilege of hot showers and decent meals at some point this summer, the Diary Room will surely be in for an earful.

MOST UNEXPECTED BACKSTABBER: JOCASTA
I have no doubt that Jocasta’s religious devotion will be a cornerstone of her time in the Big Brother house. But when Jocasta gave us a glimpse into her life before God — “I’ve done a lot of people. I’ve done men, I’ve done women.” Was I hearing that right?! — we also got a sneak preview at who could be the season’s most surprising schemer.

MOST FORGETTABLE: DERRICK
Perhaps it was his lack of screen time, or the fake “parks and recreation coordinator” job he gave himself instead of telling the HGs he’s really a police sergeant. Either way, this 30-year-old Rhode Island native had me saying, “Who?” during each one of his confessionals.

After the second group of eight enters the house, Wednesday’s initial Crazy Eights alliance quickly begins to fracture. Frankie and Victoria bond over their shared love of pink (always a solid foundation for friendship), while Paola feels out Caleb to determine how big of a threat he really is.

The HGs make their way to the backyard for the second Head of Household competition, a luau-themed endurance challenge that requires contestants to hang onto a giant rotating barbecue spit, all while getting doused with barbecue sauce that makes the whole thing look like a scene from Carrie. (Side note: Did anyone else think this HoH challenge was way more difficult than the first one that Frankie conquered? At least the first eight contestants got to stand.)

Ultimately, the competition comes down to Hayden and Caleb, with Caleb walking away as the week’s second HoH. Unfortunately for the masters of the house, Julie informs them that only one will be ensured safety for the entire week. This season, both Heads of Household will nominate two houseguests — a grand total of four potential evictees — and a new competition called “Battle of the Block” will pit each pair of nominees against each other. The nominees who win the competition will come off the chopping block, and they will dethrone the HoH who nominated them, making the former leader just as vulnerable to be nominated. It’s a pretty sweet deal, if you ask me, and way more exciting than the Golden Power of Veto — which, by the way, is that still a thing?

Oh, and don’t forget the Team America twist! The first houseguest to be recruited to our secret alliance is Joey, who is thrilled about the challenge that lies ahead. Voting is now open to choose the next member of Team America, so head on over to CBS.com to choose your ideal puppet.

Now that you’ve met all 16 contestants, who are your early favorites? Which Head of Household do you want to see dethroned this week? Sound off in the comments!