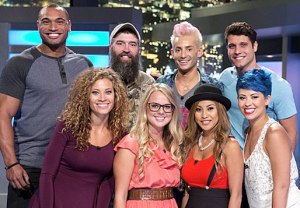 Big Brother, you’re such a tease.

Rather than kick off the summer staple’s 16th season with an introduction of all 16 houseguests, CBS instead chose to divide the premiere into two nights, dedicating each hour to eight contestants at a time.

But by the end of the hour, it seems that only meeting half of this summer’s characters was for the best, as the first batch may have been one of the loudest and wackiest in BB history. (Not to be confused with the most bigoted and discriminatory group, a title that last year’s cast continues to hold. Congrats!)

Before we review the finer points of Big Brother 16‘s opening hour, let’s meet the first group of contestants, each one touting a superlative:

MOST LIKELY TO START A SHOWMANCE: PAOLA
Girl could not get through a sentence without mentioning how much she wanted to violate fellow housemate Cody. “We were this close earlier,” she whines in the Diary Room. Charming. Other notable personality traits: Counting on her fingers, overuse of the word “like.”

MOST LIKELY TO BE A DARK HORSE: DONNY
The school groundskeeper — who could easily pass for a Duck Dynasty cast member — seems oblivious to what’s going on around him, but he’s really a superfan who’s seen every episode of every season. Watch out for this one, HGs!

MOST LIKELY TO BE VOTED OUT UNANIMOUSLY: FRANKIE
Being Ariana Grande’s half-brother instantly makes the YouTube personality a target, but even without sharing that tidbit, Frankie requires all eyes on him at all times. If and when Frankie is ever ousted, I imagine the other houseguests will gladly be showing him the door.

MOST LIKELY TO FLOAT: AMBER
Although the (stunningly beautiful) model gravitates toward the women of the house, she seems the type to make friends with anyone, without ever making any bold moves.

MOST LIKELY TO CAUSE A STIR: JOEY
No, it’s not the makeup artist’s blue hair that makes her a shoo-in for controversy. It’s probably her super-liberal, “Left wing is the best wing” stance that will cause her to clash with her fellow housemates.

MOST LIKELY TO PLAY BOTH SIDES: CODY
The former pro soccer player has some experience playing the field, and it looks like he’ll be putting it to good use in the house this summer. But I do appreciate a contestant who can play up his soccer skills at the height of World Cup hysteria. Smooth move, Cody.

MOST LIKELY TO TRIUMPH IN COMPETITIONS: DEVIN
No, it’s not because he’s ripped! …. Fine, yes, it’s because he’s ripped. But Devin, who cites his love for his 2-year-old daughter as the reason he’ll win Big Brother, also comes off as shrewd and calculating.

MOST LIKELY TO FLY UNDER THE RADAR: NICOLE
She’s a precocious nursing student — who looks exactly like Taylor Swift circa the “You Belong With Me” music video — and based on her Diary Room confessionals, she has no interest in ruffling feathers this summer.

Only a few hours go by in the house before these eight contestants are scheming, and they agree to stay by each other’s side even after the second group of contestants joins them. (Ha! How sweet.) They dub their new alliance the “Crazy Eights,” and it’s a truly adorable sight to behold — until minutes later, when two sub-alliances form. On the guys’ side, Donny confides to Devin that he’s seen every episode ever of the show, which is all Devin needs to trust the dude, and they form the “Double Ds.” For the ladies, it’s the perfect time to form a no-boys-allowed alliance, and the four dub themselves “El Cuatro.” And poor, sweet Nicole confesses that she has no idea what “El Cuatro” means in English. This is going to be a fun summer.

Julie Chen — looking radiant as always — calls the HGs to the backyard, where they compete in the first Head of Household competition of the season. The endurance challenge, which requires contestants to stay upright on a rotating log, comes down to Amber and Frankie, but Frankie is the ultimate victor after Amber (intelligently) throws the event. Looks like your HoH bedroom won’t have any family photos, Frankie!

Later, Julie informs the HGs that there will be two Heads of Household this season — but by the end of each week, only one will be left standing. As an additional twist (to which the contestants aren’t privy), viewers at home will be able to create a secret alliance called Team America, whose three members will carry out covert missions throughout the summer. The first member of Team America is…. going to be revealed Thursday night. Again with the teasing!

What did you think of the Big Brother 16 premiere? Which contestants stood out to you? And who do you think will join Team America? Hit the comments!