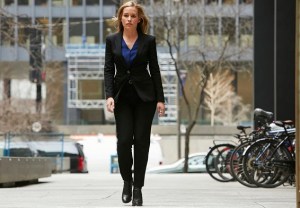 Warning: If you have yet to watch Tuesday’s season premiere of Covert Affairs, avert your eyes now. Everyone else, read on…

Covert Affairs trades in secrets, and on Tuesday’s Season 5 premiere, Annie Walker was holding onto the biggest one of all: what she was doing when she was MIA for four months. Even Auggie couldn’t get the truth out of his ex.

On top of it all, Annie seems to have hit a hiccup. While on a pursuit, the CIA agent had to stop to calm herself during “an episode” with an injection.

Below, executive producers Matt Corman and Chris Ord talk about Annie’s “condition,” the toll of secret keeping on her relationship with Auggie, Arthur’s new gig and more.

TVLINE | Is Annie’s episode stemming from the trauma of having to kill Henry?
CHRIS ORD | We will explain that down the road. It actually stems from much more than just that. Certainly, her life as a spy has exacerbated the condition. Exacerbated and also caused the condition. There’s a lot more of that story.

TVLINE | So is this something that’s a part of Annie’s backstory and her history?
MATT CORMAN | Yeah, that’s right. It’s got a physical component to it, as well.
ORD | Some of the things we’ve seen will factor into what she’s dealing with.

TVLINE | Is what happened to her over the four months going to be a big mystery arc over the whole season?
ORD | Yeah, to a certain extent, it will. And look, the agency doesn’t love it when you keep secrets from them. As much as they trade in secrets, they take it personally when their own officers harbor secrets from them. She’s pretty evasive in the first episode. And we’ll learn a lot more about where she was and what she was doing, why she felt the need to not talk about it fully.

TVLINE | She’s very evasive with Auggie at the end. Does he sense that she’s still withholding something from him? And does he continue digging at it?
ORD | Yes. I’m glad you picked up on that. That’s a big theme over at least the first third of the season is them reconciling this with one another.

TVLINE | This is an interesting change for them because usually when they’re working together, they’re very trusting and open with each other. When he senses that she’s withholding something, does that change their dynamic as handler and operative?
ORD | It’ll affect it, certainly. Look, the thing with secrets is if you share a secret, you might be letting someone in, but you’re also burdening them with a secret. So Annie’s reasons are not entirely selfish. In some ways, she doesn’t want to read Auggie in because she knows it puts him in a position where now he has to lie and he has to betray his agency. There’s a lot that goes into Annie’s choices, and we’ll be exploring that as their relationship develops.
CORMAN | Yeah, one other key thing we should mention is the show is all about secrets, right? This is the first time that Annie actually has had a secret that she’s kept from other people on the show. Other people — Arthur, Auggie, Joan – have had secrets, but Annie’s always been free from that, with the exception of, at the beginning, having to keep it a secret from her sister what she was doing. That was a much more low-level thing. These are dangerous secret that she’s harboring from the people that she cares about quite a bit.

TVLINE | Changing subjects to McQuaid, is his agenda with Annie just strictly romantic? Is there something more nefarious going on there?
CORMAN | Something more, but it’s not necessarily nefarious. But what it is exactly, you’ll have to tune in. TVLINE | In the premiere, she does not seem interested in him in that way. Are we going to start to see that change and evolve?
ORD | Yeah, in the premiere, she’s not interested in that with anyone, really. As she says to Auggie, she’s made this declaration to herself that she’s going to separate her work and her personal life. She’s going to be solely work-focused and not allow herself to be compromised by a romantic relationship, which is a serious declaration. Now, that’s a lot easier to make than it is to put into practice. A guy like McQuaid, who is so engaging and interesting, is going to challenge that.

TVLINE | Is he pursuing her on a romantic and a professional level?
ORD | There’s a lot to it.
CORMAN | The short answer is yes, and there’s a lot more than meets the eye.

TVLINE | What does Arthur’s new job working for McQuaid mean for him and for Joan, who’s going through her own job issues?
CORMAN | On one level, it’s very liberating for Arthur. He was working for the same big bureaucracy for so many years. It’s also very challenging to Joan and Arthur because, for the first four seasons of the show, they were trying to juggle the concept of working with your spouse, and now they are on the opposite side of the fence. There’s going to be, certainly, issues where they would come down with different opinions about things.

TVLINE | Let’s talk about Calder and this mysterious woman that he’s sleeping with. Is he just in for a world of trouble? And who is this person?
CORMAN | Well, first of all, we love Hill Harper, and last year, we really didn’t get to know that much about [Calder] at all. This year, we’re starting to see a little bit about what makes him tick, personally, and on the romantic side. This character, Sydney, played by Nazneen Contractor, is in several episodes, and it’s safe to say there’s more than meets the eye, as far as what you [saw in the] first episode. There’s a very rich backstory, and a very mighty and complex one that Calder will find himself in.