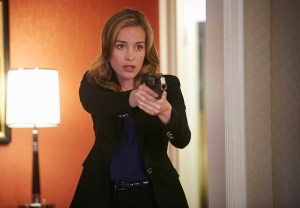 Annie Walker is finally coming in from the cold.

When Covert Affairs returns this Tuesday (USA Network, 10/9c), the CIA agent will find herself facing an uphill battle as she tries to get her old life back following a dark turn in which she killed Henry Wilcox.

At least she can pick up where she left off with ex Auggie — or can she? Although they’re once again handler and operative, Annie’s a different kind of spy now, and the toll of the job gets in the way of romance, executive producers Matt Corman and Chris Ord preview below.

Private contractor Ryan McQuaid (played by new series regular Nic Bishop), however, didn’t get the memo and quickly sets his sights on our protagonist, the showrunners note.

TVLINE | What is Annie facing as she returns to work?
MATT CORMAN | She’s facing some major challenges, both personal and professional. We’ll see, right off the bat, we’re changing the paradigm a little bit.

TVLINE | How different is she as a person and as an agent after the events of last season?
CHRIS ORD | Very different, and she has to be. [After] four years of doing this job, especially last season, seeing what she was doing in terms of going dark, in terms of chasing Henry to Hong Kong and taking him down… Those things have to inform your psyche and your headspace going forward, and we want to honor everything she’s been through as we bring her into this new season.

TVLINE | Would you say that what happened makes her a better agent? Or does it make things more difficult for her?
CORMAN | There’s an aspect of both. She certainly has a deeper understanding about the way that spycraft works, and her approach is more advanced. She’s become a very advanced spy, operating at the highest levels. But by the same token, it’s all taken a toll. Season 1, she never even carried a gun. Now, she’s moved to the point where when necessary, like with Henry, she’s willing to take somebody down in an alley.

TVLINE | At the end of last season, it seemed like the door might be open for Auggie and Annie to get back together. But from what we’ve seen in promo materials, they’re not. Why is that?
CORMAN | What’s standing in the way of any relationship when someone’s a spy, it’s the spy life. It is the toll that this job takes and the challenges that one faces doing this job. The central question on this show has always been – the polygrapher asked it in the pilot – “Can you separate work and personal life? Can you keep them both compartmentalized?” They always bleed into one another, and they always challenge and compromise one another. Again, that’s the main theme of this season, and we press that in a big way off the bat.

TVLINE | Where did you travel to this year?
CORMAN | So far, we’ve gone to Cartagena, Colombia, and to Paris and the south of France and Washington, D.C.

TVLINE | How different is the dynamic between Auggie and Annie as co-workers now that they have a romantic history?
CORMAN | That’s a really good . It’s richer for it, on one level. They understand one another in another way. But it’s also more challenging because they’re just water under the bridge. Just like any two people when they’ve had a romantic situation, it gets complicated quickly. TVLINE | You’ve cast Nic Bishop as Annie’s love interest. How different he is from the men she’s been with before on the show?
CORMAN | We love Nic, and what’s great about him as a character is [he] has no agonizing compunctions about his life or the spy world. He loves being a private spy. He loves the fact that he’s not tagged down or fettered by any of the bureaucracy of the CIA. And he wants Annie to be liberated in that same way and just enjoy having it all. He says to Arthur in this first episode, “You can have it all.” That’s a question Annie is asking herself the whole season. “Can I have it all? Can I have a regular, normal personal life and be a spy? Or are those two ideas incompatible?”