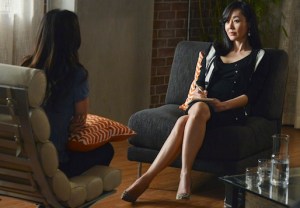 An all-important, brand-spankin’-new fifth lead character arrived on the scene during tonight’s installment of Mistresses. That she did so in a slinky black dress, with a fresh glass of chardonnay (in. her. hand.), lies slipping off her tongue and a hint of danger in her eyes makes said arrival a cause for celebration. So let’s give a slow clap for (and raise a glass of, well, anything to)… Jennifer!

Deutschmarks or dollars… American Express will do nicely, thank you!

Wait, I take back that Tina Turner lyric. I don’t mean to make light of Karen Kim’s pain, isolation and terrible, terrible Google search results — all of which are driving her to treat Secret Diary of a Call Girl like it’s The Seven Spiritual Laws of Success or the latest Tony Robbins audio-book. But girlfriend’s decision to create an escort alter-ego makes me think we’re about to make the Season 2 turn from Exposition Avenue to Crazy Street — and not a moment too soon, I might add.

Because while Episode 2.4, “Friends With Benefits,” uncovered the sad truth that Karen is still reeling from her personal-professional Season 1 spiral, that Savi hasn’t even started to deal with losing her baby in a car accident and that April might be carrying some insecurities about her presumed-dead hubby being alive and well and residing with his skank significant other in the swamps of Florida, it also lacked some of the “what the what?” deliciousness we’ve come to expect from ABC’s not-at-all-guilty summer pleasure. (I mean, feeling guilty about loving Mistresses would be like second-guessing the decision to finish that last whisper of sauv-blanc that’s taking up a bottle’s worth of space in the fridge.)

With that panther out of the bag, let’s recap the action from the hour, while raising key questions about each of our titular Mistresses.

KAREN | Our resident shrink tries online dating, and winds up having a woeful cup of coffee with a guy who Googled her and begins peppering her with way-too-specific questions about her involvement with the Sam and Elizabeth Grey case. (Pro tip: When a fella asks you about the exact suit you wore to court, it’s not to early to get a restraining order.) She’s feeling so lonely and hopeless, in fact, that she can’t even make it through a dinner with Daniel-April and Savi-Dom, suffering an acute case of Fifthwheelitis and crying in the bathrooom. Later, our gal gets a little too intrigued by formerly suicidal patient Anna’s tales of prostitution — Karen’s pen hanging limply at her side in a way that Anna’s clients never did. (Badum-bum.) The episode closes with Karen strolling all sexy-like into a hotel bar, and when a guy comes up and introduces himself, she tells him her name is… Jennifer?! (Personally, I’d have gone with something exotic, like Svetlana, or erotic, like Honey. But I haven’t given a lot of thought to escorting, to be honest.)

Key questions: Considering that Anna sought treatment with Karen following a possible suicide attempt, why exactly is Karen attempting to follow in her footsteps? Also: Is Karen just playing out a fantasy here, or is she actually gonna wind up with a wad of $100s in her purse come morning? (Don’t be throwin no shade, if Ms. Kim just wants to get paid.)

SAVI | Savi seems a little flummoxed when Dom decides they ought to come out about their relationship at work — with an official visit to Human Resources! — and then drops the bomb that Toni Taut and Tanned made a pass at him a week prior. But ultimately, what’s really thrown her off her game is the arrival of Zack — the guy with whom her car collided in the Season 1 finale — at her doorstep. He’s lost his girlfriend, his livelihood and his way in life, and he seems a little irked that nothing seems to have broken Savi’s stride. I mean, who is she, Matthew Wilder? Before long, though, she’s Facebook-stalking him, then sending him tickets to a Red Hot Chili Peppers concert — despite being aghast about ticket prices. (I know, right?!) He stops by to say “thanks” in person, and before long, Savannah Davis finally breaks down, explaining she was supposed to be a mother, that she’d felt her fetus kicking around inside her, that in the wake of her loss, she doesn’t recognize herself anymore. It’s a heartbreaking moment thanks to Alyssa Milano’s just-showy-enough performance. And just like that, she’s sharing an embrace with a stranger — though sometimes a hug is just a hug, no?

Key questions: Anyone notice how easily Savi lied to Dom that the concert tickets were for Joss? And is it just me, or has the formerly illicit couple’s chemistry cooled considerably now that they’re out in the open and watching the local news together?

APRIL | Despite their ability to raise the temperature of Sheets-ville (population: two) to Gobi Desert highs, Daniel asks April if they can try to exist outside of their toned, sweaty, constantly erotic cocoon. Like, say, why not have dinner with April’s people? Which leads to a slightly awkward night out with Savi and Dom and Karen — after which April admits her friends were initially afraid to discuss off-limits topics like April’s ex. One minor tiff later, and the sexiest duo on television is back in the sack, clothes on the floor, giggling over April’s confession that she has to pee. (Never, ever change, Ms. Malloy!) At which point Daniel gets a call from somebody named “Jessica,” who gets the “can’t talk” treatment and a quick hangup. If this beast is calling from a swamp in Florida, there will be hell to pay! And poor April, having a tinkle in the loo, is none the wiser!

Key questions: Let’s hope Daniel’s secrets don’t turn out to be too too terrible. I mean, what would the summer 2015 TV season look like without Ricky Whittle’s biceps? (It would look like a scrawny-ass punk, is what it would look like!)

JOSS | Prompted by their fabulously boozy patron Janine, Joss spends $5,000 on a table at a charity event with the notion that you can’t get rich clients if you’re not rubbing elbows with ’em. Harry reluctantly attends, too, with Kyra With the Fun Bags on his arm. In turn, Kyra invites her plastic surgeon friend Scott — but neglects to tell Joss that the dude thinks he’s there on a blind date with her. (Whoops!) Ultimately, though, the guy ticks every box: He’s crazy handsome, he’s funny, he likes carbs (even if his physique suggests he never eats them) and he’s even willing to accept being called a Labradoodle — and sends one such bow-clad beast to Joss’ home as a gag. But as sweet as Joss and Scott’s chemistry is, why can’t I shake all the little signals that she and Harry might be playing out the lyrics of a Mariah Carey song? And that song is “We Belong Together.”

Key questions: OK, let me go deep for a sec. Did anyone catch Harry’s comment to Joss: “For a committmentphobe, you’re pretty good at being all in”? Yeah, he was talking about her can-do attitude re. their party-planning biz, but it’s also worth noting Season 1, Episode 7 of Mistresses had the title “All In.” Is that executive producer Rina Mimoun dropping an Easter egg and letting us know someone’s eventually going to fall in love with her former brother-in-law? I’m not sure I’d be mad at it! You?

What did you think of the “Friends With Benefits”? Has Karen gone full Pretty Woman, or is it just a moment of light roleplay? And is Savi about to head down a dangerous road? Hit the comments with your thoughts!