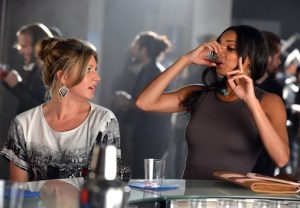 It’s “Sexy-Smoldering” with a high chance of fetish as Season 2 of Mistresses continues tonight (10/9c on ABC).

Series stars Rochelle Aytes and Jes Macallan stopped by TVLine HQ to talk about upcoming story arcs for their respective characters — home-furnishings shop owner April and freespirited party planner Joss — and from the sounds of it, we’ll be getting heaping platefuls of crazy romance, crazy sex and just plain cray-cray in the coming weeks.

RELATED | Eye on Emmy: Kaley Cuoco Dishes on One of The Big Bang Theory‘s Biggest Moments Ever: ‘I Had Chills!’

For April, her affair with hunkrageous artist Daniel (the aforementioned “Sexy-Smoldering”) will veer into dark places that will test the single mother’s moral center like never before, previews Aytes. Joss’s path, meanwhile, will lead her to “the perfect guy” — on paper, at least — but will her self-sabotaging tendencies get in the way, wonders Macallan?

PHOTOS | ‘Ship Shape: How Fave Pairs From Pretty Little Liars, The 100, Enlisted, OITNB and Other Shows Are Faring

Below, some additional teases from the show’s stars:

BROTHER(-IN-LAW)LY LOVE? | As Joss has embarked this season on a professional partnership with soon-to-be ex-brother-in-law Harry, some fans have detected a hint of sexual tension between the duo. “Joss and Harry have this really cool thing that developed in terms of their chemisty on set,” says Macallan. “What the producers saw on camera and could see in the editing room — it’s kind of what happened with myself and Shannyn Sossamon [who played Joss’ Season 1 lover Alex] in that there’s this amazing, mind-blowing energy happening. And I feel the same way about working with Brett Tucker.” But can we expect Joss and the Australian chef to add a dash of pleasure to their business-focused recipe? “Yeah, we’ve got good chemistry, but I’m not sure about a love story,” Macallan says with a laugh. “I don’t know — do you think there should be?” Either way, the actress adds, the show’s writers are “not stuck” on following the same story arcs as the original British version of Mistresses, so don’t rule anything out.

HEART TO HARTLEY | Regardless of whether or not the Mistresses team explores a Joss-Harry pairing, Macallan previews that her character will most definitely get entangled with a fella named Scott, who, “on paper, is the perfect guy” and who, on camera, is being played by the pretty much perfect Justin Hartley (Revenge, Smallville). “He’s hard to look at!” jokes Macallan. Joss will initially treat Scott with ambivalence, but his focused courtship will eventually win her heart. “He’s got this interesting fetish, though,” adds Macallan. “It’s nothing bad. Actually, it’s quite sexy — we’re not Fifty Shades of Grey or anything.” Joss’ biggest challenge, however, will involve fighting the urge to self-sabotage a good relationship.

SISTERLY SQUABBLING | “We fight a lot this season,” Macallan says of Joss and Savi (Alyssa Milano) — and not just because Joss is working with big sister’s estranged spouse. “Savi has a new character in her life who provokes this huge red flag in Joss,” Macallan explains. “It’s a different kind of fight than they had in Season 1. It used to be a dynamic where Savi was being the protective one; now it’s the other way around.”

HUNK-ERING DOWN | Aytes says the scorching chemistry between herself and new costar Ricky Whittle — whose Daniel memorably seduced April right on top of a paint-splattered canvas in Episode 2 — was evident from the moment they met. “I got to audition with three actors [who were up for the role of Daniel], and I think that’s the best way to find out if you have chemistry with someone,” Aytes recalls. “I could tell in the audition room [Whittle] was the one. It was very clear. And he’s pretty hot.”

DON’T JUDGE A BOOK BY ITS ABS | April and Daniel’s sexytimes thus far represent a “calm before the storm,” teases Aytes. “You should be very worried — there are some page-turners and cliffhangers. Daniel is not exactly who he says he is, and we’ll see this season how far April will go for love.” April’s dalliance with this “deceiving” character won’t be a brief one, Aytes adds. “There are some little bombs that get dropped throughout the season — but you won’t fully understand what’s happening until the end,” she promises. “Even when you think you know the answers, there’s another twist.”