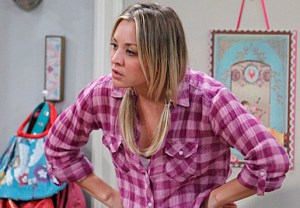 The Big Bang Theory isn’t getting any smaller. TV’s No. 1 comedy wrapped its seventh season with its most watched finale ever, and a three-year renewal means the gang will be geeking out until at least May 2017.

The only female there on Day 1, Kaley Cuoco-Sweeting‘s Penny at first served as the nubile neighbor Leonard (played by Johnny Galecki) would worship from afar/across the hall, but through seven seasons she has evolved into a richer character that can crack wise with any of the boys or her gal pals.

Having already netted a Critics Choice Award nod and on the heels of delivering a destined-to-be-classic sitcom scene in which Penny and Leonard (finally) got engaged, could this be the year that the Emmys in turn say “Yes!” to nominating Cuoco-Sweeting for Supporting Actress in a Comedy?

TVLINE | In March, the show was renewed for three more years, which will take it to 10 seasons. Of course, I imagine the money is kinda-sorta good, but was the decision to re-sign for multiple years at all daunting?
Oh God, no. There is nothing daunting about that. I think anybody would like to know that they have a job for the next three years, so I was completely on board with that, and very grateful and excited. It’s such a rarity to know that you have a place [to work] for the next couple of years.

TVLINE | Are you also excited to meet the challenge of keeping things fresh for another three years?
Yes, that’s going to be the challenge for the writers, for sure, but I feel like we have so many stories to tell. There are so many funny things that could happen to any of these characters.

TVLINE | What do you notice most when you stumble across an old episode?
Probably my hair, or my wardrobe, or like, “Why did I wear that color of lipstick?” [Laughs] Especially after seven years, you’re like, “What was I thinking?!” The sets seem different, too. Everything does. It’s very strange.

TVLINE | On a scale of 1 to 10, where would your rank Penny’s geek girl aptitude at this point?
Oh my gosh, I’d say its pretty up there – between a 9 and a 10, for sure. I think she knows a lot more about all this stuff than she would like to or ever thought she would. I think it’s funny when she catches herself talking about Star Trek or under-standing what they’re saying – like, “How did this happen?” She’s come a long way. TVLINE | You once told me that one of the best pieces of advice you got from your 8 Simple Rules dad, John Ritter, was to never give the studio audience the same take twice. Are you still doing that?
Absolutely. That’s the best advice I’ve gotten, or ever witnessed. John always just did that, and I was like, “How does he keep everyone laughing so hard?” On our show we do three takes, maybe four max, so you get a chance to do it four different ways, and it keeps everyone cracking up. It also gives the producers and the editors a lot of options, but it’s more for the audience, making sure they never know what to expect, which is very important.

TVLINE | What advice would you be able to give an aspiring actress now versus seven years ago?
That you just never know what’s going to happen. The fact that I auditioned for this show three times and twice didn’t get hired…. It’s about perseverance. I remember the third time I went back, I was thinking, “It’s obviously not right for me, I don’t know why they keep bringing me back!” But I’m really glad I did go in that third time, because obviously it changed my life. So just remember, anything can happen. You think it’s the wrong thing but it could be the right thing. You just need to keep going. People [in my circle] were like, “Look, you want to work for Chuck Lorre. If you want to do comedy… You’ve got to get back in that room.” He was the reason that we went back.

TVLINE | Just before you called, I rewatched the “Strawberry Pop Tart” scene. Was it everything you had hoped for from such a long-anticipated moment?
It was. Funny enough, they wrote that Pop Tart line at the very last minute and I couldn’t remember it! I kept flubbing it, making everyone laugh, to the point that I was like, “OK, this is taking the charm out of the scene!” [Laughs] But it ended up being so cute, and the audience was going crazy, standing and cheering…. We had to keep telling them to calm down, but they had waited so long for it. (Watch the scene here.)

TVLINE | That had to be one of the biggest audience reactions ever, I imagine.
Oh my God, they screamed. One of the biggest reactions was for when Sheldon and Amy (played by Jim Parsons and Mayim Bialik) kissed on the train, and our engagement was huge too. We just sat there for 10 minutes while they were cheering and clapping. I had chills. I feel like I’m a viewer of the show too, so I was excited. I really wanted that to happen, too, for “Lenny,” for Leonard and Penny.

TVLINE | And if I have my math right, that was the second time in one year you were proposed to.
Yes, I know. [Laughs] This last year has been so wedding-involved. I worked on [the Kevin Hart comedy] The Wedding Ringer, and then I really got engaged – and then married [to pro tennis player Ryan Sweeting] — and then Leonard and Penny got engaged…. It’s all very strange.

TVLINE | What I liked about the proposal scene is how it opened up with Penny doing some serious self-assessment – something she would not have bothered with five, six years ago. Yeah, I think she started to realize that life is happening and this fairy tale of “Oh, I want to be an actress” [needs evaluation]. She has this perfect guy next to her and she wanted to start making life happen for her and not wait for it to come to her. This whole season I feel like she’s been evaluating what she wants to do, so I hope next season she has more of an idea of what her path will be.

TVLINE | What kind of bride-to-be do you think Penny will be?
If I could write it myself, I think Leonard will be more of the bride, because I think it would be funny if he were the planner. Penny is so aloof, she’d be a lot more easy-going than Leonard.

TVLINE | Though I feel she’d draw the line at a Lord of the Rings theme.
That’s funny…. Yeah, she knows when to draw the line. But Leonard is so excited, so he might take the reins and go all Kanye on this.

TVLINE | So, if a wedding is coming, do we get to finally cast your mom?
I know, I’ve been waiting! I don’t know what they’re going to do, but I have always thought — and I hope this doesn’t offend her because I know she’s super young, though we know Penny’s mom got knocked up very early – that Lisa Kudrow would be so perfect. I’ve said that for years. I think it would be hilarious, plus I’m a huge fan of hers, so it’s a selfish wish.

TVLINE | Seven successful seasons in, does it irk you at all that some people out there still dismiss Big Bang as populist fare and don’t give the show the credit it is due? Do people do that…? I don’t care what anybody says. It’s the biggest show out there, and the show stands on its own. It speaks for itself.

TVLINE | Who makes you laugh?
Simon Helberg (who plays Howard) makes me laugh, really, really hard. Everyone at work is so funny and I learn from them every single day, but Simon is, I think, one of the funniest people I have ever met.. Outside of the show, my husband makes me laugh for sure — we make each other laugh very hard — and my sister makes me laugh, too. She’s hilarious and sarcastic, the opposite of me. I surround myself with some funny people!

Want more scoop on Big Bang Theory, or for any other show? Email insideline@tvline.com and your question may be answered via Matt’s Inside Line.