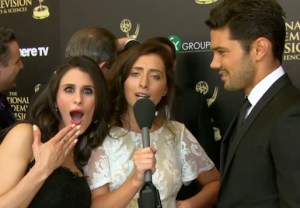 When it was announced that this year’s Daytime Emmys would be streamed online (and not broadcast), surely no one imagined that the accompanying red carpet pre-show would set the bar so unacceptably low, with an interview team that would lob rape “jokes,” talk about “go[ing] lesbian” for one actress and quite possibly not recognize more than five of the people they spoke to.

Rather than recruit any number of proper reporters who cover the daytime-TV genre, the National Academy of Television Arts & Sciences issued a casting call for “millennials between the ages of 18-35… who have a strong entertainment news background and/or very strong social media following (300,000 followers minimum),” Soap Opera Network reported.

Among the red carpet team’s more egregious affronts — and this is barely scratching the surface:

* Furlan said to nominated The Young and the Restless alum Daniel Polo — whom she didn’t know was no longer on the show playing Jamie, but that should be the worst of her shortcomings — “I don’t want to go to jail for this one.” Upon learning the young actor is in fact (barely) of age, she then remarked: “Oh, so he’s legal!”

Furlan literally came onto, and hard, every male in attendance, to a degree that makes E!’s Giuliana Rancic look positively demure. Even Days of Our Lives‘ Galen Gering couldn’t help but throw shade at the brassy brunette as she squealed, “Oh my gawd!” at his castmate Greg Vaughan (Eric); see photo.

* Harlow asked Lawrence Saint-Victor (Carter, The Bold and the Beautiful) — “a beautiful chocolate man,” as she introduced him — “What’s it like to be a black man on a soap opera these days?” Not coming from any place of social insight, but simply for lack of anything else to ask him.

* Elizabeth asked veteran actor Joseph Mascolo (Stefano, Days), who had been introduced to them as a daytime legend: “What is so legendary about you, sir?”

* When presented with Monty Hall, Furlan and Elizabeth befuddled the iconic game show host by trying to explain to him what “shipping” is — in the context of Furlan ‘shipping Elizabeth and the 92-year-old Hall.

* After she and Elizabeth came onto Ryan Paevey (Nathan, General Hospital) six ways to Sunday, running the full gamut of clumsy doctor and policeman/handcuff innuendos, Furlan said as the actor left, “We’re going to get you away from us before we rape you.”

Imagine for a moment — but don’t, because it is sickening — if a male reporter had directed that comment to an actress.

Again, the above is but a small sampling of what the four “social media experts” (though mostly Furlan and Elizabeth) got away with over the course of the two-hour pre-show. (And all while asking barely a single storyline-related question, because being familiar with soaps of course was not part of the aforementioned job description.)

Many on Twitter have asked for NATAS to apologize for the red carpet car wreck, which many proper daytime-TV journalists repeatedly and vocally derided in social media. The soap opera acting community has enough problems claiming deserved respect for their work; associating them with such an inane production does no one any favors. Were you among those who “tuned in” to this mess?

UPDATE 6/23: A NATAS rep has declined to comment for this story.