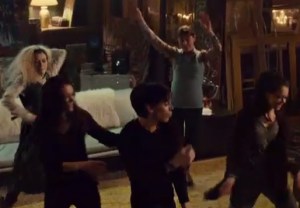 Warning: If you have yet to watch Saturday’s Season 2 finale of Orphan Black, avert your eyes now. Everyone else, read on…

What better way to celebrate the end of an intense season of Orphan Black than with a dance party?

While that unforgettable finale moment where Sarah, Helena, Cosima, Alison, Felix and Kira take part in some free-spirited dancing looked like fun, it was a hugely difficult technical challenge for creators Graeme Manson and John Fawcett and the cast and crew — but one they knew they wanted to conquer from the start of the season.

Below, Manson and Fawcett reveal how they captured that clone dance party — we’ve got video below, if you somehow missed it — and discuss the behind-the-scenes of Sarah and Cosima’s, literally, touching moment in bed.

TVLINE | The dance party scene was so great. After having the clones apart for most of the season, was it important for you to bring them together and have that as a little reward for the fans at the end?
MANSON | Absolutely. Yeah, very much so. We had this clone dance party concept going from the beginning. It became quite clear to us that it could be a tremendous emotional climax for the season, and it would be a great technical challenge for John to direct. It was a scene that required a lot of planning and required a lot of buy-in for the networks for the extra time required to do it. So we started planning and pitching that scene very early in the season, actually, to be able to pull it off near the end. It was an intensive couple of days to shoot that.
FAWCETT | We had never done a four-clone scene before, let alone a dance scene. It was certainly the most complex thing that we had undertaken to date. The scene where Helena shows up in the loft and meets Cosima and Alison, Sarah’s there, Kira jumps into Helena’s arms – that scene and the dance party took two full days to shoot. The way that was done is the first day, I think Tat [Maslany] began as Cosima, and we shot all of the Cosima parts for both scenes. Then she switched to Alison, and we shot Alison for the meeting Helena scene and the dance party. And then the next day, we came back and she started as Helena, and we shot all the layers and bits for that with three doubles. Three different doubles, and everyone’s changing at the same time. So every time Tat changes, the other girls change, also.

TVLINE | And Felix is interacting with all of them, too, at the same time.
FAWCETT | That was all part of the technical challenge of doing the dance shot. In truth, there was one long shot that was done and designed for the dance party, in which Felix cleverly begins with Cosima, then interacts with Alison and then finally interacts with Sarah. It was actually all shot as one shot and then, in the end, because it’s a little long and we’re trying to shorten it up, we intercut it and gave it a bit more pace. It was definitely a huge technical challenge.
MANSON | You should have seen the tape on the floor required. All the marks. I’ve never seen anything like it. It looked like snakes and ladders.
FAWCETT | We probably rehearsed that scene – full-on rehearsals [with] stand-ins, our visual effects guys, the camera guys – three times prior to getting to set. And [we] involved Tat in those rehearsals, tried to steal her away from what she was shooting to be in rehearsal.
MANSON | At least three times in the episode previously, we were rehearsing.
FAWCETT | We were rehearsing while Episode 9 was shooting, and I was trying to steal Tat off the set to do the dance rehearsal for me because I was prepping Episode 10. TVLINE | The scene with Sarah and Cosima in bed was also incredible.
MANSON | That’s one of my favorite scenes of the year.
FAWCETT | It was a really beautifully written scene. It’s really emotional for both those girls.
MANSON | It’s another scene that I knew we were going to do from the beginning, and I kept trying to put that scene in earlier episodes. It landed where it belonged in the end.
FAWCETT | It lands so well here. One of the things I’m proud of, from just a directorial point of view, is there’s this really beautiful high shot over the bed where the two girls are lying in bed and Cosima holds her hand up and they intertwine arms while they’re talking. You get to hold in that shot for a while, watching them touch hands and talk. When I watch it, it just blows my mind because it’s so seamless from a visual effects point of view. I even forget.
MANSON | Only one of those is Tat’s arms.
FAWCETT | It’s Tat and then [her double] Kathryn’s arm is attached to Cosima. Tat playing Sarah is her real hand. Sarah is intertwining hands with Kathryn’s arm, which is cut off Kathryn’s body and attached to Cosima’s body. … Sometimes the visual effects, you struggle with them a little bit. And then sometimes, they just come together beautifully.

Relive the amazing clone dance party scene below and stay tuned to TVLine for even more Orphan Black scoop from Manson and Fawcett!