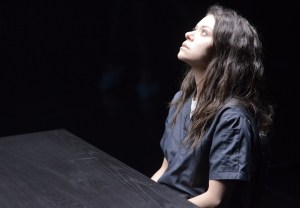 Warning: If you have yet to watch Saturday’s Season 2 finale of Orphan Black, avert your eyes now. Everyone else, read on…

Orphan Black‘s Season 2 finale on Saturday added a new element to the conspiracy: male clones! Sarah discovered that the military had their own experiment going on, Project Castor, and Prolethean Mark was one of the subjects.

Meanwhile, Helena was kidnapped by the uniformed men, Cosima made a possible life-saving discovery and Rachel got a pencil to the eye!

Below, creators Graeme Manson and John Fawcett open up about the male clone twist, the fates of Sarah’s sisters, the show’s future (where is the Season 3 renewal?!) and more.

TVLINE | Fans have been speculating about male clones for a while now, some even guessing it might be Felix. How long has this reveal been in the works?
MANSON | Since near the end of last season and really over the break between Season 1 and Season 2. We really liked the idea of a male clone opening up an entirely new facet of this conspiracy. We knew that there were two different aspects to the conspiracy. One was the Project Leda faction, and the other was the Project Castor faction.

TVLINE | What does the introduction of male clones mean for the world of the show and the characters? What is the impact?
MANSON | Well, that’s something yet to be determined, what the full impact of that actually is. At the moment, it’s a part of the puzzle. It’s a clue, and obviously a very big one. It opens up a lot of possibilities for the direction of Season 3.
FAWCETT | But at the moment, it seems that the Project Leda, that created female clones, and the Project Castor that created male clones are competing projects with no idea about one another. Paul has infiltrated Leda, so now Castor knows much more about Leda than Leda does about Castor.

TVLINE | Marion mentioned that there are other competing agendas, one of which is Project Castor. Is the military now the Big Bad in the way the Proletheans were this season?
FAWCETT | They are if not a Big Bad, then certainly a great big question mark.
MANSON | There’s a lot of elements that we needed to accomplish in this episode. It needed really to be a springboard for Season 3 and all the questions and clues that we want to follow in Season 3.

TVLINE | You keep saying Season 3. I’m actually surprised that it still hasn’t been officially announced. Is that just a formality at this point?
FAWCETT | No, it hasn’t been officially announced, so we can’t really say one way or the other about that. Graeme and I just talk the show all the time. And so we talk about Season 3. We talk about Season 4.
MANSON | We’re not slowing down on this end. TVLINE | Going back to the male clones, why did you choose to make it Mark?
MANSON | We really looked at all the permutations. The truth is is that Ari Millen really impressed us with the work he did with Mark’s character. He can be really creepy, and yet, he can show this heart. So we began to countenance that idea. And it really does something that we really like in that the end folds back to the beginning, so that Sarah’s facing down not the same person, but the same face, the face across the table at the beginning.
FAWCETT | When we had made the decision that we wanted to introduce the Project Castor males, there was a lot of discussion about who that would be. We want to make choices that will surprise the audience and not make obvious choices. And so, as much as it would have been fun to have Felix be the clone, it just seemed like it was too obvious and it just wasn’t going to be surprising enough. So I think people will be surprised by this, but when you look back on the season, you’ll go, “Oh my God, they’ve been planning this the whole time.”

TVLINE | Did Ari know he was going to be a male clone when he was cast?
FAWCETT | No, he sure didn’t. You know, what’s interesting about Ari is we cast Ari, obviously, early, early on because he appeared in Episode 1. That character was actually scheduled to die in Episode 6. We loved Ari and we loved Mark so much that we decided to preserve him. Right about that same time, we were making the decision that Mark would be a clone. This was very, very top-secret, and we kept that under wraps. Graeme called [Ari], actually, just before the scripts of [Episode] 210 came out.

TVLINE | The male clone that we saw in Marion’s house seems unwell and deranged. Is he the Helena of the male clones?
FAWCETT | [Laughs] Good one. He could be.
MANSON | We call him Scarface.
FAWCETT | He doesn’t have a name quite yet. But we like the fact that he looks scary, threatening and glitchy.

TVLINE | Mark’s not aware that he’s a clone, right?
FAWCETT | Mark isn’t, no. We don’t think he is.
MANSON | It is good to mention that we went to Tat [Maslany] and let her know that we’re going to do a male clone and that we’re seriously thinking of Ari. She was 100 percent behind that, just a real supporter of the talent on our show. Unequivocally, she said, “He’s a great actor. That’s a great idea.” TVLINE | Last we saw, Helena was being carted off to Project Castor by Paul and Mrs. S. Should we be worried for Helena? What is their agenda with Helena?
FAWCETT | It’s hard to know what their agenda is with Helena at this point. We want to worry about where Helena’s gone and know that she’s in the hands of bad guys, basically.  That’s something that we want to deal with in the next season. That’s part of the clues for next season.

TVLINE | Moving on to Rachel, did she survive that pencil to the eye? Was that lethal?
MANSON | That’s a pretty nasty-looking pencil. The pencil looks like it went pretty deep. I don’t know — she was twitching on the ground there. Regardless of what Rachel’s future is, we liked some startling, horrifying yet slightly absurd kind of ending to that character and the war between Rachel and Sarah. So that’s our version of a conclusion to that. If she continues on, obviously, she’s going to be a little f—cked up, and we kind of wrecked her face a little bit. And it’s kind of nice to wreck people’s face once in a while, don’t you think? Certainly Rachel’s.

TVLINE | I want to thank you for not killing Cosima — at least not yet. Was that a tough decision, putting the character through so much pain and possible death this season? MANSON | Yeah, it was very emotional for the character. Obviously, for Delphine and Cosima, it was a very emotional season for them both. And it’s been a rough season for us, too, as Cosima’s fate hangs in the balance and we talk about her health. Her health has been a ticking clock on the season. As you watch that episode, when it comes to the clone dance party, it really feels like maybe this is Cosima’s last ride. We couldn’t quite — I shouldn’t say we couldn’t quite. What we made the decision to do, at the end of this season, was to end Cosima still alive, very, very sick, but in her hands, she holds the children’s book that Professor Duncan gave to Kira with some sort of codes inside. And that, to us, at least represents some hope for the character and maybe to the fans, as well.

TVLINE | And as far as Alison, where does she go from here? She seems to be in such a good place with herself and Donnie. Can that last?
FAWCETT | Well, we love Team Hendrik going forward through the suburbs hand in hand. But if it’s all looking pretty rosy, something’s bound to go wrong in Alison’s world.
MANSON | Yeah, but we’re happy that they’re finally back together.
FAWCETT | We think, as a team, there’s a lot of fun to be had with those two.

Stay tuned to TVLine for even more Orphan Black scoop from Manson and Fawcett!