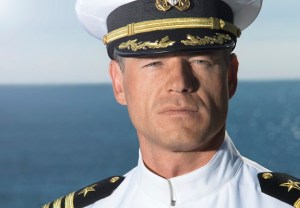 That’s how The Last Ship star Eric Dane sums up the state of the world in his new TNT series (premiering this Sunday at 9/8c), from executive producer Michael Bay (the Transformers franchise).

The mayhem starts after a virus decimates the global population, leaving Dane’s Captain Tom Chandler and his naval destroyer crew, who were out of harm’s way at sea, to find a cure.

Below, Dane previews the splashy pilot and how Tom is the complete opposite of his Grey’s Anatomy alter ego Mark Sloane. He also weighs in on Mark and Lexie’s sad demise and having his name live on in the show.

TVLINE | The pilot is quite a production – there are a lot of visual effects and action. Has it been challenging to maintain that level going forward?
TNT has invested a lot into this project, and it’s not like we blew it all on the pilot. We maintain it for all 10 episodes, the level of action and drama and production value. In fact, in some episodes, it gets better. You watch shows sometimes – it’s this amazing pilot – and then you watch the second episode and you’re like, “What happened?” I think we carry it pretty well throughout the season.

TVLINE | The scenery is very striking, too. Where did you shoot the Antarctic scenes?
Don’t take my word for this, because I wasn’t in that stuff, but I think it was in Manitoba, Canada. Wherever there was a lot of snow. But that wasn’t shot on a soundstage, and that wasn’t CGI. That was real, along with all the ship footage at sea. We really went underway with these guys for three days, out over the horizon of San Diego, and shot the five-inch cannon and did some torpedo invasion drills. It was pretty spectacular.

TVLINE | Another thing that stands out when you do a series like this is the uniform. Did you immediately feel like you were the character when you put it on?
Eighty percent of the work was done for me the second I put that uniform on. You walk a little taller. You stand up a little straighter. My hat’s off to these people in the military, the sacrifices they make to keep us all safe. TVLINE | What are Tom’s defining characteristics?
He’s honorable. He’s consistent. He’s a bit of a maverick at times. He’s sincere. Coming from Grey’s Anatomy, those are things I hadn’t gotten to play for a little bit. Mark Sloan was just the opposite of all that stuff.

TVLINE | You have this ship that is not only their home base, but also their safety zone, so you can’t venture out too much at first.
Oh, but they do. They have to. They’ve got to get food and fuel. We have to get monkeys so we can test the vaccine. We go to Guantanamo Bay, Cuba, to refuel and get provisions and we run into some problems there with some Al-Qaeda, which is pretty timely. By Episode 4 or 5, we’re in the jungle of Costa Rica and Nicaragua, looking for monkeys and we run into a narco-terrorist who’s enslaved a village of people. TVLINE | We still get so many unhappy emails from fans of Mark and Lexie about how their Grey’s storyline ended. Do you feel their pain?
I do. I miss those guys. I spent a lot of time working with them, and I miss them. That was a fun time in my life, working on that show.

TVLINE | Would you have preferred a happier ending for Mark and Lexie?
No, I always want these characters to go out in flames.

TVLINE | The hospital is now named after your character. How does that feel?
That feels pretty cool, I guess. I mean, I haven’t seen the show, but I guess it’s Sloan Memorial or something, right?