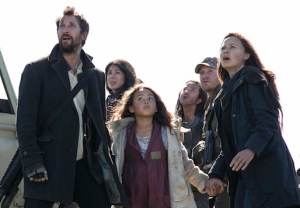 When TNT’s Falling Skies resumes the fight for Earth this Sunday at 10/9c, the 2nd Mass will in short order be splintered like never before, separating key players into distinct (and distinctly dangerous) new locales.

“We were looking at [Star Wars: Episode V] The Empire Strikes Back as sort of the model,” says David Eick (Battlestar Galactica), who took over as the showrunner for Season 4. “Theres something compelling about having your heroes separated, cordoned off from each other, and then you find yourself as an audience yearning for their reunion. You of course become more aware, in a heightened sense, of the value that each character brings, because you see what they have to endure when they’re without each other.”

Once the dust settles and eyes reopen in the wake of a shocking season-opening skirmish, Tom and Weaver find themselves in a form of “solitary confinement” within a Warsaw ghetto-type of prison, while Hal and Pope are forced into a “strange bedfellows vibe” as they navigate, in their very singular ways, the gnarly streets of the urban installation.

The why of the ghetto-like confinement — including why the likes of Tom are being spared and not just snuffed — remains a mystery, though Eick hints, “Periodically inmates are carried off by these hideous flying creatures we call ‘black hornets,’ to some unknown fate. It’s only over the course of the season that we are able to determine that the Espheni are keeping chosen human beings alive”… for, well, an ominous reason.

But not everyone is thrown into this nitty-gritty sitch. Ben, Maggie and Lourdes, for example, wind up as residents of a commune that is unlike any place the survivors have seen before. In this oddly quiet Utopia, “They share responsibilities and duties, they’re a very agrarian society, they’re a peaceful society — there are no guns allowed on the premises,” Eick previews. “At first it seems surreal to Ben. And only when we start to getting to the bottom of why this community has been developed do we start to see the bigger picture of its purpose.”

Only adding to the mystery of the commune’s existence is the identity of the person lording over it — a young adult (!) Lexi (fka Alexis), played by Harry Potter‘s Scarlett Byrne. Having inherited from his predecessor no specific plan for Tom and Anne’s rapidly aging tyke, Eick says, “I pitched Mr. [Steven] Spielberg and Michael Wright, the head of TNT, a plan for her that they seemed very responsive to, so we proceeded in that direction.” Lexi’s mom Anne, meanwhile, is off on her own journey, leading a battalion of 2nd Mass stragglers while anxiously searching for her once-wee daughter.

As for the once again-youngest Mason, Matt has been inducted into a “very creepy, unsettling world full of kids dressed in uniforms and chanting mantras” — a purposely Hitler Youth-like movement supervised by an Aryan lad named Kent (Dakota Daulby). “We discover that the Espheni have managed to co-opt a contingent of human beings and through the use of propaganda persuade them into believing that the Espheni are here only for peaceful, ‘handshake across the galaxy’ reasons,” Eick explains. “These camps have been set up to effectively brainwash young people — kind of like the Khmer Rouge — into turning their parents in and being used as pawns to infiltrate militias and camps.”

Being a Mason, Matt, though, is perhaps not so easily turned. Says Eick, “He certainly does a fair job of persuading Kent that he is going along with the program… but then all hell breaks loose.”

New faces on hand for Season 4 include Academy Award winner Mira Sorvino as someone “who comes in and sort of gives Pope a run for his money,”  Eick teases, plus “a new Volm who is left behind with the 2nd Mass, and who I think audiences are going to like. He’s quite interesting and unusual!”