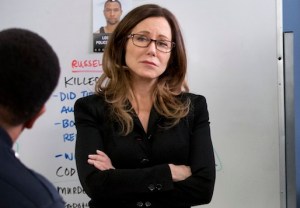 There will always be Major Crimes to solve, and this Monday at 9/8c, Sharon Raydor & Co. are back on duty to do just that, as TNT’s popular drama opens Season 3. TVLine invited series creator James Duff to preview the theme for the 19-episode season, tease some tangled family ties and share the story behind the big, “fun” episode that just might launch a favorite character into his own series.

TVLINE | I know you always like to have a theme for the season. What’s the word for Season 3?
“Expectations.” If you come from my part of the country, if you come from Texas or anyplace that’s South-adjacent, you are used to seeing people flat out ruin their lives because they did not turn out the way they expected. Expectations are kind of what separate us from the rest of the food chain, the ability to plan ahead and to see beyond the curve. But when you get ahead of the curve and it’s not what you imagined, or it’s less than what you wanted, or it’s more complicated than you thought, or the things you expected to be there are just not there, that can cause a lot of problems.

TVLINE | What’s one example of a character whose expectations are put in play?
Well, if you look at the first episode, it’s very dark and we signal a lot about what the themes are of the season. We are almost born with the expectation that you will have a family. It’s almost in some ways an instinct, you know, to think “my family is always going to be there, I am part of something bigger than myself.” And yet, you don’t have any right to family. Family is not a given. And so in our first episode we kind of signal how we’re going to be using expectation, both as a device in the [weekly] mystery and in the relationship between Sharon and Rusty, and Provenza.

RELATED | Major Crimes Season 3 Scoop: Will the Team Ever Hang Out and Relax?

TVLINE | You now have two seasons of Major Crimes behind you. What are you finding that the format of this show allows you to do that The Closer didn’t?
The most amazing thing about the change is that [during The Closer] I was viewing the justice system from one singular perspective almost all the time; I did not have the more fractured view that I have now. Now I’m having to cobble together a view of the justice system from different angles. I mean, I loved examining it from Brenda’s point of view because that was me looking at the justice system and thinking, “What if I applied my own obsessive needs to the justice system as I do to storytelling? And what if I gave a character some of my bad habits and some of my good habits?” So it was sort of that tug of war between pragmatism and idealism, Brenda’s need to idealistically follow her concept of the justice system wherever it led and Pope’s pragmatic need to keep balance in the world. [With Major Crimes] I’m opening up myself to lots and lots of other points of view, and it’s kind of opened my heart up in a way that The Closer did not. And that’s where Rusty appeared, because I feel that compassion for my youth. A lot of us don’t feel so good about the mistakes of our entry into the adult world, and he gives me a chance to revisit that.

TVLINE | What I still get a kick out of is seeing Provenza out there running a crime scene, barking orders, being large and in charge. This is a guy who in any given episode of The Closer would have just been content to, you know,  ride his desk. But now…
He’s like the male lead, and I love that. My relationship with G.W. [Bailey] goes back to when I was 16 years old, when I met him. He was my teacher in a theatre summer camp. I grew up watching G.W. do Richard the III and Troilus and Cressida and Candide…. I had no idea he did comedies until he was in the movies, or M*A*S*H. I knew he had a big range and that we had not tapped it all, so when we were trying to divvy up the show, if you want to say it that way, I thought, “This is a chance really to utilize all of him.” I also liked that [Provenza] is a guy who could retire, but he’s there because he loves the job regardless of what he says.

TVLINE | I would argue he loves it more now than he did during The Closer.
Well, I would say he’s got more authority than he had in The Closer, because Sharon delegates like real captains do. And he loves being “large and in charge,” as you say, at the crime scene. He is not always the clown any more. And he’s morphed into this fabulous grandfather or father figure for Rusty.

TVLINE | I think about the Season 2 finale, when he capped that punk in the head….
Yes! People are now coming up to him in airports and saying, “Hey, good shot,” and G.W. loves it. I loved that it’s the oldest guy in the playground who was able to win the day there.

TVLINE | What do you want to say about Sharon’s upcoming journey? Season 2 left off with her in a pretty content place.
Yes, it did. Her command is solidified, and she’s closer to Flynn as a friend than she’s ever been, so she has him as sort of ballast when she’s dealing with Provenza, who still complains. Her journey to see Rusty do well in the world only increases, as he turns 18. She’s looking for the final step in solidifying their relationship, which is adoption, but that will require modifications in her relationship with her husband Jack, played by Tom Berenger, so it’s all very… complicated.

TVLINE | Of course, it’s been reported that Rusty’s mother will be resurfacing (played by Once and Again‘s Ever Carradine). Does that threaten to chip away some of what he’s built with Sharon?
I think at first the audience probably will think that. But I try to be very fair in my introduction to her and to Rusty, because I feel like Rusty has grown from last year. I think if she’d appeared, you know, in December of last year, she would have gotten a very different response from him than she does now. But he’s in therapy and seeing a psychiatrist, so he’s got a clue. But it’s a really interesting dynamic between him and his mother. Ever Carradine is un-be-lievable.

TVLINE | Are we going to meet any of Raydor’s children this season?
Yes, you’re going to meet her son in Episode 9. Ricky is in his mid-20s and maybe not as thrilled about the potential little brother [in Rusty] as she is about the addition of a son. I think we could fairly say that Rusty is the little brother Ricky never wanted.

TVLINE | According to one of my readers, you promised that if Season 3 got more than 15 episodes, we’d meet Andy’s family…?
We are going to meet Andy’s daughter, the one he’s had the most trouble with. And as you know, Andy has misled his family into thinking his relationship with Sharon is perhaps a little closer than it actually is. They do have warm feelings for each other, and that’s touching, but they are not dating — or at least not yet. But Flynn’s daughter thinks they are. So when she comes to work to have a discussion with Sharon about a problem in her life… it becomes a paranoid freak-out time for Flynn. coming back, including for what we reported is an episode that may set up a Fritz spin-off. What do you want to say about introducing this “S.O.B.” element?
The Special Operations Bureau is interesting on its own. It has the largest municipal Air Force in the world. It’s in charge of all the tactical elements of the LAPD, including the dive team, the bomb team, SWAT, criminal intelligence and, in our version, SIS, which is Special Investigation Section, the undercover work. We were talking about doing a great big episode of Major Crimes around Episode 7, because that’s when our audience begins to rise. We wanted to give them a big bang -out Major Crimes episode, and as we were talking about it, Jon Tenney became available, after King and Maxwell left the air.  I love working with Jon — he’s an amazing actor and someone I have a long and really positive relationship with. I thought it might be interesting to have him back at the LAPD being offered a job in change of the Special Operations Bureau, which would be a great job. Because after you reach the age of 49 at FBI, you’re crazy to stay. You’ve maxed your pension, you’re not going to go anywhere…. It’s actually a terrible problem in law enforcement that Congress ought to address, but they won’t. So most FBI agents at the age of 50 take all their expertise and go somewhere else.

So at first I thought this was a great way to have Jon back in the world of Major Crimes on a more permanent basis, and then we started discussing it with the network and it was like, “Let’s see how it plays.” It is not a pilot. It is a Major Crimes episode. There’s absolutely no agreement to have a series. If there was one, I’d have a deal and I’d know what the license fee was… all that sort of stuff. But we don’t have any of those things. We’re just doing a super-sized nine-day shooting schedule episode of Major Crimes, and it’s going to be a lot of fun.