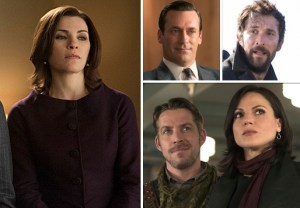 Is The Good Wife‘s hubby still a bad boy? Will Once Upon a Time pull a switcheroo? Who’s hunting a Teen Wolf? Who is Dixie‘s “super” new doc? Read on for answers to those questions plus teases from other shows.

I know it’s early yet, but do you have any scoop on next season of The Good Wife? –Suzanne
‘Member the flirty intern who popped her head into Peter’s office toward the end of the season? Well, where’s there’s smoke, there may be fire. “It all comes down to [actor] availability, but yes,” series cocreator Robert King says he aims to pick up that thread in the fall as the show explores the idea of a power couple’s public marriage taking very private detours. “How does that work? Can it work? Is it truly possible that you can have an agreement with your spouse that the sexual relationship is over and the love has to be put on hold, even though we’re going to use each other for what power we can give each other?” King poses. “Chris [Noth] and Jules [Margulies] seem very willing to take us there, so we’re up for it.”

After all the build-up of Once Upon a Time‘s Regina and Robin being soul mates, please tell me that we aren’t all the sudden going to find out that the lion tattoo is really common and Robin really wasn’t the man in the pub. –Megan
I’ve seen that “theory” floating around, yeah, but Once cocreator Adam Horowitz shot an arrow right through it when I ran it by him. “No, no, no…. That [flashback scene] was not a misdirect,” he reassures. “The man Regina saw in the tavern with the tattoo was Robin Hood.”

Give me anything on Teen Wolf to help tide me over until June 23! –Mary Kate
A member of Scott’s pack is about go missing in Season 4, and there’s only one man capable of tracking them down. The catch? That man doesn’t technically exist yet. MTV is currently casting the potentially recurring role of Dr. Vallack, a “distinguished” gentleman with a unique ability to “unlock the mystery of a disappearance.” In other words, this won’t be your typical vanishing act.

I would love any scoop you have on Awkward. Pretty please! –Lindy
Two guess on what this means, and the first one doesn’t count: A casting call has gone out for a male in his late 30s/early 40s who “bears a striking resemblance” to Beau Mirchoff, to play “someone” who will stir up big emotions in Matty’s world at the close of Season 4.

I will take absolutely anything and everything you can get your hands on about Graceland Season 2, especially if it’s Charlie-related! –Sam
I just screened the season opener, which finds Mike returning to the house under extremely dangerous circumstances, in the midst of pursuing his dream job in D.C. Sadly, in his eyes, things at Graceland have changed, and not for the better. As for Charlie: There have been some developments with regards to her “thing” with Briggs, though as revealed in one scene, she appears distracted by a loose thread from Season 1.

Short of spoilers, do you have any early predictions about how Mad Men will end next summer? –Victoria
Predictions shmictions! I can confirm that Mad Men will end its seven-season run… literally under the watchful eye of its creator. Meaning, Matt Weiner is set to pen the series finale as well as direct the final two episodes of the acclaimed AMC drama. Also: It was all in Tommy Westphall’s mind.

Season 4 of Falling Skies looks insane! We’ve been hearing about potential new aliens coming in. Anything you can tease? –Ganon
That premiere I watched earlier in the week, and the cold open is pretty damn b-a-n-a-n-a-s. One of the new aliens you’ve heard about may give George Lucas reason to phone his lawyers. (IOW, we’re gonna need a bigger can of Off!)

Do you have anything on Hal and Lourdes from Falling Skies? I have been wanting them together since the beginning. –Breanna
Based on what happens in that b-a-n-a-n-a-s cold open, you’d be well advised to exhibit some patience. Because for one thing, when we next see her a few scenes later, Lourdes has… changed.

Got any Orphan Is the New Black scoop? And by that I mean any Orphan Black or OITNB news. –Khaira
Sadly, OITNB is almost un-scoopable, since someone is bound to show up in Comments and bark, “Well, I binged all 13 episodes by 1 pm, and this is what happens….” So I’ll choose Door No. 2 tell you that if you think you know what Orphan star Tatiana Maslany is capable of, prepare to have your mind blown this Saturday — and see a lot of great Felix scenes as a result. Meanwhile, Alison and Donnie turning out to be more similar than they’d both like to admit may just be their blessing. As for our science geeks, Delphine will be on the outside looking in with Cosima after last week’s betrayal.

Are we ever going to see the Major Crimes team together in a relaxed situation — a party or a dinner, for example, in a bar or at Sharon’s condo? –Giulia
Keep your eyes peeled for Season 3’s eighth episode, G, and you’ll get your wish! “After they solve the murder, everybody is hanging out in a happy setting at Sharon’s condo,” show boss James Duff shares, “and for a very good reason.”

Is Anne Dudek set to reprise her role in Season 5 of Covert Affairs? – Mark
I can offer a firm… maybe. I’m hearing that in the episodes broken to date, Annie’s sis has yet to resurface, though “there’s always the possibility” that she could be written into one of the later episodes.

I was disappointed to find out that Crossing Lines won’t be returning to NBC for Season 2. Do you know if Netflix will pick it up? –Bernadette
Sorry – Netflix has no plans to offer Season 2 of Crossing Lines anytime soon.

Can you give any spoilers on Hart of Dixie, please? –Carol
When the show returns at midseason, expect to meet Dr. Henry Dalton, a gent in his late 30s/early 40s who is not only handsome and charming but also one of the richest, most connected men in the South. Dalton is described as “the man that women want and men want to be… a walking Superman.” (Mr. Welling is 37, just sayin’!)