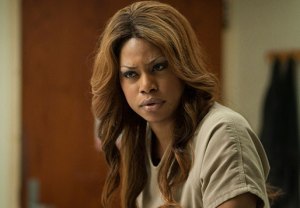 When chatting with Laverne Cox about her Orange Is the New Black alter ego Sophia Burset, you may want to keep the Kleenex nearby.

In Season 1 of the original Netflix series, Cox developed a hugely personal relationship with her character, a transgender inmate who proved equal parts tenacious and vulnerable as she endured the challenges of prison life. A transgender woman herself, Cox tells TVLine that her inherent connection with Sophia resulted in some of the season’s most emotional on-set moments.

Throughout Sophia’s greatest triumphs (receiving a Christmas card from her estranged son) and most crushing disappointments (abruptly getting cut off from her hormones), Cox brought sincerity to her complex character, making her a standout in Orange‘s sizable cast — and one of our Dream Emmy Nominees for Supporting Actress in a Comedy Series.

On the heels of Orange’s second season premiere, might Cox soon earn Emmy recognition for her emotional Season 1 work? TVLine caught up with the actress to discuss her most difficult scenes, her admiration for the show’s writing staff and the other Litchfield inmate she’d most like to play.

RELATED  Eye on Emmy: Lizzy Caplan on Keeping Masters of Sex Dangerous (and Why Season 2 Is Off-Limits to Her Family)

TVLINE | You’ve recently become a breakout star in one of TV’s largest ensemble casts. What has that experience been like for you?
To be singled out in this cast is amazing. I marvel at how good everyone is, and I’m just really honored to have anyone consider my work. Just watching Season 2, I’m blown away by everybody. I’ve texted a few actors and I’m like, “I’m going to text everybody on the show, telling them how good their work is!” [Laughs] But I can’t text everybody. I should just send out a mass e-mail that says, “You’re amazing!” [Pauses] That’s what I should do, actually.

TVLINE | I know it’s hard to pick, but do you have a favorite character aside from your own?
A lot of people are living for Suzanne aka Crazy Eyes, played brilliantly by Uzo Aduba. She’s so good, and that character is so complicated. I would love to play her. But Uzo owns it completely. TVLINE | In comparison to some other Litchfield inmates, Sophia isn’t always quite as quick to fly off the handle when she’s upset. She tries to talk things out, even when she’s angry. Do you like that about your character?
It feels true to who I am, but Sophia will go off, too. [Laughs] When Sophia needs to stand up for herself, there’s something very measured and calculated about it. She’s thinking about the end game. Certainly when they were taking her off her hormones, she had moments of reactivity, but she’s also someone who’s trying to strategize and scheme around getting what she wants. And Sophia is a mom, too. She’s just trying not to get into trouble, she’s trying not to lose the salon. She’s trying to work everything at all times, but she does have her moments when she’s pissed.

TVLINE | There are some crucial Sophia scenes throughout Season 1. The first one that comes to mind is in the Thanksgiving episode, when Sophia gives wife Crystal her blessing to see other people.
Oh, gosh. [Sighs] Even you saying it, my stomach is in knots. I still don’t want to do that.

TVLINE | I was going to ask later about your most challenging scenes to film, but it seems like that one struck a particular chord.
We’re into Season 3 now, and me giving my wife my blessing to see other people is still gut-wrenching. I acknowledge that I basically ruined this woman’s life by transitioning [to a woman] and going to jail. I do want her to be happy, but she’s still the love of my life. Oh my God, I’m getting emotional talking about it! Wow, this is crazy. It’s just a character, Laverne! [Laughs] But I’m very connected to that storyline. I do want her to be happy, but it’s really hard for me.

RELATED  Eye on Emmy: Kaley Cuoco Dishes on One of The Big Bang Theory’s Biggest Moments Ever: ‘I Had Chills!’

TVLINE | And yet, when Sophia hangs up the phone after giving Crystal her blessing, she seems like she’s at peace with it. Do you suspect that’s not really the case?
The funny thing is, my direction from Michael [Trim] was to have a moment where I was OK with it, where things were resolved, at least in that moment. That really came from the director, that didn’t come from me. I’m not okay. [Laughs] I want her to be outside the prison, waiting for me to get out, and I want us to live happily ever after. Even though she’s not really into women and she doesn’t want to be a lesbian, I want to believe our relationship can transcend all of that. TVLINE | Another important moment for Sophia is when she receives a Christmas card from her son that she knows is signed in his handwriting. Were you relieved to see Sophia finding hope in that scene?
When I read that in the script, I cried. There was actually a scene that was cut, where I’m handed the card and my character just breaks down in tears. They ended up cutting that part, but it’s huge for her. For anyone who’s incarcerated, and particularly for Sophia, what it has done to her family is really, really hard for her. It’s hard to think about having devastated them and not being there for them in these crucial moments. That moment [when Sophia receives the card] is saying, “Maybe there is hope that I can repair this relationship, that things will be OK.” It’s one of my favorite moments. I have a lot of favorite Sophia moments, actually.

TVLINE | What are some other Season 1 scenes that stand out?
The scene I had the most fun doing was when Sophia dresses as a woman for the first time for Crystal. There was one moment where Jodie Foster [who directed the episode] came out and there were tears in her eyes. I was crying during the scene, too. Actually, most of Jodie’s direction was, “Don’t cry!” [Laughs] So I’m fighting back tears in the scene and Jodie comes out and she’s actually crying. I just think it says so much about the nature of Crystal and Sophia’s relationship. There’s a lot going on in this really simple moment. That was one of my favorite moments of my career, actually.

TVLINE | You and Sophia seem very intertwined, and many of these scenes have been personal for you. How do you approach such emotional material?
I stay connected to it. A lot of my process is about taking direction so I don’t get stuck doing it one way. The director may put me on a totally different path, or another actor might do something that inspires something I didn’t even expect. I try to prepare in a way that I’m connected to the scene, but I also try to leave a lot of room to be in the moment. TVLINE | Despite Orange’s dramatic elements, the show is competing as a comedy at this year’s Emmys. Do you think the series is a comedy at its core?
[Creator] Jenji [Kohan] has said that, in really harrowing circumstances, you have to laugh or you’ll kill yourself. About a month after our show premiered, this woman saw me and screamed, “Oh my God, I love you on the show! I was in prison!” And I was like, “Uh, okay! What were you in for?” [Laughs] And I asked her if the show was true to her experience and she said absolutely. So much of what I’ve heard from people who have been incarcerated is the ridiculousness and absurdity of it, and our show really captures that — the need to laugh, the need to point out the ridiculous and how the ridiculous can be funny, in the face of such tragedy. I feel like our show has to have that element of comedy to offset the very serious stuff that happens in prison.

TVLINE | In Season 2, Sophia is taking on a more authoritative role, particularly when she gives the girls a lesson in sex ed. Are there other parts of Sophia’s personality you’d like to continue fleshing out?
I met someone at a Women’s Prison Association benefit, and she was talking about the women who got to work in the salon in her prison. This woman basically said you had to [perform oral sex] to get a job working in the salon. [Laughs] And I thought, “Well, Sophia didn’t do that, so I wonder how she got that job in the salon.” There’s something very calculated about her. She’s a survivor and she’s working this system. I’m really curious about seeing the inner workings of how she negotiates surviving, and almost thriving, in this prison system.

TVLINE | Why do you think you and your character are resonating with fans of the show right now?
I can’t even think that it’s necessarily about me. I think it’s about the writing. If you don’t have great writing, you’re just dead. I met a lot of folks on a college tour this year, and a lot of students were connecting to [Sophia’s] struggle, and they connected to her relationship with Sister Ingalls, her relationship with her family. A lot of people were just really touched by this story, and early on in the series, too. It’s probably because Sophia’s backstory comes so early in Season 1 that folks are getting into the show and connecting with her. It has to be the writing and the deep humanity that’s written into her.