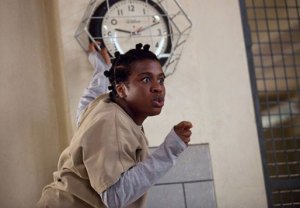 THE EPISODE | “Hugs Can Be Deceiving”

THE PERFORMANCE | A garden rose by any other name, Aduba’s turn as Suzanne Warren (aka “Crazy Eyes”) has proved as engaging as ever in the series’ sophomore season, and in the Episode 3, we finally got the glimpse into her past we’ve wanted for some time.

First excluded by her friends during a game of Celebrity, then dismissed by Taystee after trying to strike up a conversation, Aduba made it clear that Suzanne’s skin was not as thick as it seemed, making her quiet acceptance of their treatment all the more heartbreaking.

Later, in a flashback to her high school graduation, Suzanne stood up on stage, unable to sing the song she’d prepared and Aduba showed us a teenager unable to fully express herself, instead resorting to the violent head-slapping that eventually becomes her response to failure.

This made her subsequent interaction with Vee all the more significant. Desperate for acceptance, the wild-eyed inmate practically electrocuted herself to get the older woman the pack of cigarettes she’d hidden years ago, and Aduba’s eyes shone with nothing but hope as she proudly presented her prison mother with the retrieved prize.

In those last few moments, as Vee served her cake and offered to re-do her hair, Aduba channeled Suzanne’s younger self, revealing a softness and quiet glee as she discovered something we knew all along: there’s so much more to her than her “Crazy Eyes.” HONORABLE MENTION | When your costar is Tatiana Maslany, it can be tough to get the props you deserve. Such is the case with Orphan Black‘s unsung hero, Jordan Gavaris. On last Saturday’s episode, as Sarah’s lovable, witty foster brother Felix bonded with transclone Tony, Gavaris revealed a warmth and depth underneath Fee’s playful exterior, briefly stealing the spotlight from his castmate. (For the record, we totally get why Tony couldn’t stop himself from planting a kiss on Felix.)

HONORABLE MENTION | Rita Volk‘s performance in Tuesday’s season finale of MTV’s Faking It was the best kind of painful. After eight episodes of lying and hiding her true feelings, Volk’s Amy could no longer keep the floodgates closed, letting loose a torrent of emotions on best friend — but, sadly, not girlfriend — Karma. The desperation in Amy’s voice as she practically begged Karma to love her back was gut-wrenching and, more importantly, believable. It was like a younger, lesbian version of Meredith Grey’s “Pick me, choose me, love me.” And we do, Ms. Volk. We do!