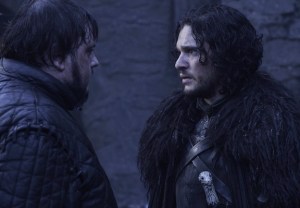 Forget The Fault in Our Stars. If you want a piece of pop culture that’ll make you weep on the regular and cause you to gnash your teeth at the heavens, you can’t do any better than HBO’s fantasy-drama-with-a-body-count Game of Thrones. (Sorry, Hazel and Augustus.) Wanna cry? This week’s episode has you covered.

You can’t possibly be surprised. The end of each Thrones season turns into a virtual going-out-of-business sale: Everything (and everyone, or at least that’s how it feels) must go. Quickly. And with maximum heartbreak.

Which brings us to Sunday’s “The Watchers on the Wall,” in which Ygritte meets a bloody end in Jon’s arms — and she’s just one casualty of an intense, two-front battle that decimates the Night’s Watch and foreshadows even more carnage in next week’s finale — and the season to come.

Here’s a brief rundown of what takes place during the hour, which is set entirely at The Wall:

• In a sweet scene atop the icy structure, a grieving Sam asks Jon to tell him what loving — and being loved in return — really feels like. (Well, that and sex.) Snow struggles to put his experience with Ygritte into words, and ultimately fails, grumbling, “I’m not a bleedin’ poet.”  (Side note: I loved Sam, ever the thinker, trying to find a loophole in the Night’s Watch chastity vow.)

• But Tarly’s broken heart is miraculously mended when Gilly and little Sam, having escaped the band of wildlings and Thenns, arrive at the wall alive. Sam and Gilly kiss, then he stashes her and the baby somewhere safe. “From now on, wherever you go, I go, too,” he promises her.

• We learn Master Aemon was a total player in his day. Is anyone really surprised?

• Jon’s prediction about Mance Rayder’s armies attacking begins to come true as the group of wildlings — including Ygritte, Tormund and the Thenns — launch an assault on the southern gate around the same time that another of Mance’s forces — this one featuring two angry giants — approaches Castle Black from the opposite side.

RELATED | Was Thrones Too Bloody? And Other TV Qs!

• Ygritte, who’s been warning everyone in her group to let her kill Jon when the time comes, finds her former lover on the battlefield right after he kills Styr and readies her bow. She looks totally ready to skewer him… until the boy whose village was destroyed by her gang fells her before she can let her arrow fly.

• Jon makes his way to the redhead and holds her in his arms as her life starts to ebb away. They reminisce about their glorious respite in the cave, and he assures her they can return to that happiness again. “We’ll go back there,” he says. She gets in one more wry “You know nothing, Jon Snow” — I mean, girl’s not wrong; she’s clearly about to go to beyond The Wall in the metaphorical sense — before succumbing to her wounds. Sniff! Bye, Ygritte! I’ll miss yer feisty little face. (And make sure to check out my post-mortem with Rose Leslie and Kit Harington.)

• The rest of the action, in a nutshell: grappling hooks, fiery arrows, Alliser Thorne speechifying, giants using a woolly freakin’ mammoth as if it were a Ford F150 with towing package, one truly impressive impaling, Sam taking out a Thenn!, Grenn and a crew in the tunnel reciting their vows to buck themselves up in the face of an approaching (and ticked-off) giant, Ghost getting in on the fight and Janos Slynt fleeing like a total coward.

• Ygritte’s far from the only one who makes a lunch date with Ned Stark during the episode. Grenn, Pyp and a bunch of Jon’s brothers give their lives while successfully defending The Wall. Meanwhile, Tormund the wildling is taken prisoner, and one of the giants becomes permanently unjolly.

• Despite all of the carnage, the Night’s Watch manages to win the first night of battle. Yet Jon — who’s become the de facto commander — knows that his side can’t sustain another evening of fighting. “We can hold them off for a day or two, but we’ll never beat them,” he informs Sam. So Snow leaves to find and kill Mance Rayder, thinking it his only hope of disbanding the army of thousands and ending the war. Sam strenuously objects. “You’re right, it’s a bad plan,” a weary Jon replies. “What’s your plan?” Touché.

Now it’s your turn. What did you think of the episode? Will you miss Ygritte and Jon’s Night’s Watch pals? Are you happy Gilly and the baby lived through that attack on Mole’s Town?  Sound off in the comments!