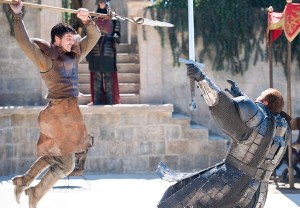 We’ve got questions, and you’ve (maybe) got answers! With another week of TV gone by, we’re lobbing queries left and right about shows including Game of Thrones, Veep, Fargo and So You Think You Can Dance!

1 | Wasn’t the premiere of NBC’s Crossbones far less campy than it appeared in the promos?

2 | We know Orphan Black has a lot going on, but shouldn’t Sarah and Art at least make mention of Helena’s whereabouts?

3 | Once Game of Thrones‘ Mountain had squashed Oberyn Martell’s head like an overripe strawberry, did the HBO series really have to show us the aftermath? And are you already missing the sexy Dornish prince, even though he’s been gone less than a week? And wouldn’t it have been great to see the look on Arya’s face if she were to have met Sansa 2.0?

4 | Silicon Valley fans, is anyone clear what a Weissman score is? (Other than having a high one is a good thing.) And could we have a web-series of a sleep-deprived Jared pitching alternative Pied Piper apps? 5 | Are we the only ones who thought Veep Selina’s haircut really wasn’t so bad? And might Dan actually look better with the beard?

6 | Did watching the Halt and Catch Fire kids play with a Speak & Spell make you wonder whatever happened to your Texas Instruments toys?

7 | Are we really supposed to believe that despite Devious Maids’ Nick owning an eight-bedroom home, not a single one of them is an indoor gym? Also, why has he been keeping Opal’s secret when it’s clear that Dahlia’s death is entirely her fault?

8 | Why, why, why must there always be a contestant on Food Network Star who isn’t comfortable in front of the camera? Don’t they know that’s a huge part of the job description?

9 | While it was nice of Mistresses to show us that Karen is a decent enough therapist to pay the mortgage on her gorgeous house, we’re ready for her to fire up the oven and serve us piping-hot-mess souffle for the rest of the year, right? Also, can anyone fathom how Harry and Kyra With the Fun Bags’ morning-sex scene went down (ahem) with ABC’s censors without getting left on the editing-room floor? (Not that we’re complaining…) 10 | Seriously, Bachelorette producers? “Pantaspreneur”? Also, raise your hand if four hours of ABC’s reality dating competition in one week is twice as much as you can/want to handle!

11 | As wonderfully inspired as Fargo‘s outta nowhere time jump was, does it kinda suck that we were deprived of witnessing more of Molly and Gus’ courtship?

12 | Did Awkward really need the “Luke might be cheating on Jenna” fake-out before the credits? (Also, why was Luke stripped down to his boxers for that massage?)

13 | Couldn’t Faking It‘s Amy do so much better than the kind-of-shallow Karma? And weren’t the storm clouds at the end of this week’s episode a titch over the top? We’d have guessed that trouble is brewing on the horizon regardless of the imagery.

14 | Although So You Think You Can Dancer James Thomas’ contortionist moves were a thing of freaky wonder, should the judges really have put him through to choreography if they could barely stand to watch him do his thing without covering their eyes?

16 | Let’s face it: Wasn’t John Oliver’s impassioned plea to Internet commenters on Last Week Tonight the most important TV monologue of the week? 17 | Is ABC perhaps being a bit optimistic about how many people will tune into Rising Star, let alone vote with the app and have their avatar appear on The Wall?

18 | We’re diehard romantics, make no mistake: But did The 100’s Finn and Clarke really hit pause on their race to warn the others at camp, in order to survey their feeeeeelings for each other? Also, are you a bit disappointed that the Adults in Space element of the story apparently will last barely a season?

19 | Have you seen Arrow star Stephen Amell’s first pre-season workout drill? Did you break a sweat just watching it?

20 | It took three-and-a-half seasons for Melissa & Joey to even make it to the aisle. Did the show really need the twist of Joe having a teenage daughter he didn’t know about?

21 | Is Baby Daddy going to completely ignore Danny’s feelings for Riley? Or is it only something to trot out any time he gets into a serious relationship?

22 | No one on staff here is an expert in bar design per se, but why does Undateable have the manager’s office right off the main room where, like, a restroom would be? When there apparently is a whole upstairs… right up the stairs? Also, did any Bill Lawrence comedy loyalists experience deja vu when Briga Heelan started dueting with her 23 | Did Last Comic Standing‘s DeAnne “Tell It To My Balls!” Smith totally make you think of SNL‘s “Kings of Catchphrase Comedy Tour” bit?

24 | Does Big Brother‘s new hi-def broadcast mean that houseguests’ bigoted views will be clearer than ever?