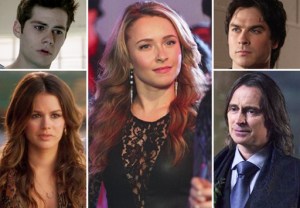 Question: Do you have any intel on if Hayden Panettiere’s pregnancy will be written into Nashville next season? —Brooke
Ausiello: I’m told Callie Khouri and her fellow writers are debating this issue as we speak (many of them heard the news around the same time as the general public, which means they’ve only had a week or so to weigh the pros and cons). My guess? HP’s baby bump will be incorporated into the show.

Question: Will Rachel Bilson’s pregnancy be written into the fourth season of Hart of Dixie? —Julianne
Ausiello: Unlike the uncertainty surrounding Nashville’s Juliette, I hear Dixie producers have made a decision about whether or not to impregnate Zoe. Unfortunately, they’re not sharing it with anyone. A show source would only confirm that “Rachel will appear in all upcoming episodes.”

Question: This hiatus is killing me. Got any Teen Wolf spoilers? Preferably anything about Stiles? —Stephanie
Ausiello: You’re in luck, Stephanie, because the June 23 premiere is full of Stiles. Not only does he get a chance to play bad ass, which is always fun, but he also has a few intense moments with both of the ladies in his life — one more so than the other. Needless to say, Stiles’ love life won’t become any less complicated in Season 4.

Question: Any truth to those rumors on Instagram that Damon is done for good on The Vampire Diaries? —Janelle
Ausiello: Allow me to put those rumors to rest, Janelle. We’ve confirmed that Ian Somerhalder will be back on The Vampire Diaries next season, though it’s still anyone’s guess where Damon will be. As for Somerhalder’s Instagram post — a picture of a grave with the caption “Rest in Peace Damon Salvatore. #GameOver :(” — he was just  jerking fans’ chains. Question: Any Grey’s Anatomy scoop on Mer-Der for Season 11? Will they break up? Heard a rumor that Shonda Rhimes is gonna kill Mer and put Derek and Torres together. —Patricia
Ausiello: Sources confirm to me exclusively, Patricia, that you’ve been taking hits from Janelle’s bong. As we reported back in January, Ellen Pompeo inked a new two-year contract with the show, which means Mer isn’t going anywhere anytime soon. A Mer-Der break-up also seems unlikely, but there has been unconfirmed buzz that the duo are about to face one of their more challenging seasons in recent memory, which makes the timing of Cristina’s exit horrible for Mer.

Question: Will Matthew Goode be returning to The Good Wife next season? Finn started growing on me by the finale. —Jennifer
Ausiello: Robert and Michelle King apparently share your enthusiasm, because I can exclusively confirm that Goode will be back in Season 6 as a full-fledged series regular.

Question: Covert Affairs‘ Auggie has gotten a lot of promotions in past seasons that haven’t lasted – any promotions this year, and if so, will they stick? –Rhiannon
Ausiello: “No promotions so far this year,” Christopher Gorham answered when we chatted him up at Upfronts, “and I’d be surprised if we see any more of that, because really, Auggie loves what he does, and nothing else really fits.”

Question: Is Spencer Reid going to get happiness in the new season of Criminal Minds (for example: a new love interest)? He really needs to catch a break for once. –Diana
Ausiello: I don’t know about any romantic developments, but if show boss Erica Messer has her way, we may witness happier days for Reid and his mother Diana, whose mental condition, it has been hinted, is improving. “I’ve been dying to revisit Jane Lynch’s character forever, and now that Glee’s going to be in its last season that might be more possible,” Messer told us. “She’s at the top of our list.” (Messer also confirmed that Reid’s portrayer, Matthew Gray Gubler, is locked in to direct the usual two episodes next season.)

Question: What is gonna be the status of Barry and Felicity’s relationship on The Flash and Arrow? –Rachelle
Ausiello: It is hinted in the Flash premiere that Barry’s trip to Starling City (and/or a certain someone he met there!) indeed made an impression on him. But we also see almost immediately that the CSI whiz shares a quite complicated “relationship” with Iris West, the police detective’s daughter he “grew up with” after his mother was murdered/his father arrested. Obviously, the question will be: When will those two ever be on the same page regarding what they feel beyond a “brother/sister” vibe? Question: This recent casting development has me wondering whether Jeffrey Dean Morgan will be returning to Shameless next season. What do you know? —Craig
Ausiello: I know the show definitely wants Morgan back, but there’s no deal currently in place. (JDM is a busy guy.)

Question: Will we get to see Once Upon a Time‘s “Rumbelle” as a married couple, seeing them in their home instead if the shop all the time? Will they have a honeymoon, eventually? Will we see some happy times?  –Intarr
Ausiello: Funny you should bust out the H-word. Because in previewing Season 4 — where Rumple will continue to conceal the secret about the true dagger, as well as revisit whatever complicated history he has with that ice queen, Elsa — series cocreator Adam Horowitz said, “There is a list of things that are brewing for Belle and Rumple to deal with, but before they do, let’s let them enjoy their honeymoon.” (Surely he was speaking figuratively, so calm down, everyone.)

Question: Who is going to play Sharon Beck on Major Crimes? Also, James Duff said that if Season 3 got more than 15 episodes, we could meet Andy’s family. Since there will be 19, is that now going to happen? –Ilona
Ausiello: Ever Carradine (Once and Again) has been cast as Rusty’s biological mother (our friends at TVGuide.com reported), and it sounds like one doozy of a role. “Ever is un-be-lievable,” show boss Duff  raved to us. “She and Graham [Patrick Martin] are just fantastic together, and she and Mary [McDonnell], too.” (All told, Duff promises a “fair” look at the “very interesting dynamic” between mother and son.) As for Question No. 2, Duff says yes, this season we will meet Andy’s troublesome daughter, who shows up at the MCD one day, under the impression her dad is dating Raydor! Question: I’m still reeling from Hannibal‘s Season 2 finale, but I’ve got to ask: Was I the only person who wasn’t sure until the last second whether Hannibal was going to try to kiss or kill Will Graham in that final bloodbath of a scene? –Peter
Ausiello: Good grief, you’ve got a twisted mind, Peter! (Just like me.) So let’s ask showrunner Bryan Fuller about the homoerotic undertones between killer and profiler that ramped up over the course of the season. “I don’t think they wanted to get it on at all!” exclaims Fuller. “But sure, the homoeroticism was absolutely intentional. If you could’ve heard me cackling in the editing room, you would take it with the naughty wink with which it was intended for a certain portion of the audience.” Putting it another way, “Will Graham’s heterosexual,” Fuller adds. “Hannibal Lecter, though, is the devil, so I think he’s turned on by anything that’s alive, and he can find a sensuality and a sexuality in all manner of things — because he has an awareness and a view of the world that is truly unique. So, no, I wouldn’t put it past him.”

Question: I know it’s early, but any intel on Season 3 of Hannibal would be appreciated. –Kayla
Ausiello: Bloody well, then! Fuller promises a “very ambitious” slate of episodes that will focus on Will Graham’s quest to find and capture Dr. Lecter, a quest that will begin with Hugh Dancy’s addled profiler “getting to the roots of what makes this cannibal who he is.” Expect some plot points to be drawn from Thomas Harris’ Hannibal Rising origin story — or at least some ” impressions of who Hannibal was before [he began to interact with] any of [the show’s] characters,” Fuller adds. That said, just because the sociopath is out of the bag (so to speak), don’t expect Hannibal to press pause on his extrakillricular activities. “Oh, I don’t think he worries about such things,” Fuller says, with a laugh, when asked if our titular cannibal will put away his knives now that the FBI is openly pursuing him.

Question: Loving Mistresses — any scoop on the rest of Season 2? — Luke
Ausiello: Get ready to meet Joss’…husband? No, our realtor-turned-party-planner isn’t going to wake up in Vegas, secretly married — not to our knowledge, anyhow — but her portrayer Jes Macallan tells us that her real-life spouse, Monk‘s Jason Gray-Stanford, is in the midst of filming a five-episode arc as an FBI agent. Much to the actress’ chagrin, Joss doesn’t cross paths with Gray-Stanford’s G-man. Instead, he’ll become entangled with Rochelle Aytes’ April. “And if you want the drama this season,” Macallan promises, “it’s with April.” Question: Will Michelle Hurst be returning to season two of Orange Is the New Black? I’m really excited for the premiere on June 6, but I’d be even more excited knowing that Miss Claudette is returning. —Austin
Ausiello: There’s no sight of Miss. C in the first two episodes, but there are plenty of new characters who will quickly fascinate you with their cigarette-smuggling-via-cockroach business (seriously!) and astrological charts. Also new this season: male prisoners!

Question: Do you have anything on Switched at Birth? —Nikki
Ausiello: Bay and Emmett’s night of passion will be followed by a whole mess of complications — does boyfriend Tank ring a bell? — in the June 16 season opener. And that’s too bad because Emmett could really use Bay’s support when things go from bad to worse with tormentor Matthew.

Question: How will Callie react when she meets her biological father on The Fosters? —Marissa
Ausiello: Better question: How will you react upon seeing Dawson’s Creek‘s Kerr “silverfox” Smith playing dad to a teenager? Also, what makes you think Callie wants to meet her father when the show returns on June 16?

Question: Anything on Americans Season 3? —Andrew
Ausiello: As you saw in the finale, Martha’s got a gun — and in Season 3 she’s gonna use it. Deadpans exec producer Joe Weisberg: “What did Chekov say? If you get a gun in Season 2, it has to go off in Season 3?”