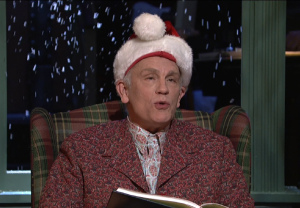 Crossbones star John Malkovich lives abroad most of the year, and he isn’t in the habit of revisiting past work. Put those two facts together, and it’s easy to understand why until recently, he was completely unaware that his 2008 Saturday Night Live monologue has become the stuff of Christmas tradition in the United States.

The performance, from a December episode in which Malkovich reads a sobering version of Clement Clarke Moore’s A Visit From St. Nicholas to a group of children, is replayed each holiday season as part of the comedy series’ annual special. And TVLine couldn’t help but ask the prolific actor about it at a press event for his new NBC series. (Spoiler alert: He gets extra Malkovich-y at the end.)

TVLINE | This is a bit off-topic, but I have to ask: Your Saturday Night Live Christmas sketch is now re-broadcast every year —
Oh yeah?

TVLINE | — and I’m wondering if you had any idea that people would continue to think it was funny years later. How did it come about?
I just found some facts on the Internet about what would really happen if all that bulls–t were true.

TVLINE | Was the monologue your idea?
I may be wrong, but I think was [Simon Rich’s] and I did kind of rewrite some of it, if I remember… Originally, I think it was just me reading the poem and being kind of hateful. So if I remember, that’s sort of how that happened.

TVLINE | Did you have any idea that it would live on?
I didn’t know. No. I’m not much on follow-up. I do [a job], and on to the next. ‘Cause I find that oftentimes what happens at first glimpse isn’t really what something is, and generally I know what I wanted to do. I know where I failed, I think, or didn’t fully succeed or epically failed or may have succeeded in some ways. But I just move forward. It’s funny — I didn’t even know.