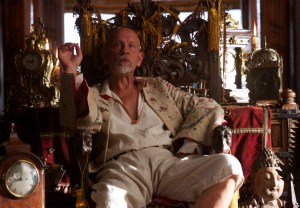 Yo ho, yo ho, a pirate’s life for John Malkovich.

The enigmatic film star’s latest project, NBC’s high seas drama Crossbones, casts off tonight (10/9c) for a 10-episode summer voyage. From Luther creator Neil Cross, the series follows the legendary pirate Blackbeard years after his alleged death, as he presides over a tropical island of misfits and criminals.

That’s where British agent Tom Lowe (played by Covert Affairs‘ Richard Coyle) finds — and plans to kill — the storied outlaw… until the situation becomes murkier than the depths of Davy Jones’ Locker.

RELATED | NBC’s Undateable: Will You Take It Out Again?

“What I thought was interesting is the great empires were just flat-out stealing, and they were being stole from,” Malkovich (Being John Malkovich, Dangerous Liaisons) tells a group of reporters over tea at New York City’s Plaza Hotel. “So what’s the moral question, really? It’s thieves stealing from thieves.”

Still, questions of right and wrong weren’t what shivered Malkovitch’s timbers and got him to sign on for his first American TV series after reading only the first script.

“All of the characters had good complexities and good interior lives,” the actor says, adding that Cross is “a good writer, and that’s really what interested me. I wouldn’t have cared if it were pirates or ruthless professors.”

Read on for some nuggets from TVLine’s experience tea-ing John Malkovich.

Your Blackbeard has a very unique look: He doesn’t actually have that famous black beard. Did you have any say in his appearance?
I had some say, in that I know what a nightmare it is for wigs and beards in tropical heat, because I’ve always done my own makeup and wigs, etc. That would just be hellish. [It] comes unglued every five seconds, you can see it clearly all the time if you know what to look for, and I do. Also, I’m 60 years old… This is purposefully Blackbeard 20 years after Blackbeard was killed. So I was involved only really tangentially, and mostly thinking about what it would mean for production to constantly be fiddling. And there is a Blackbeard look [used in flashbacks] which I think was not wholly unsuccessful, either, but not something you would want to weigh the production down with for six months.

How much is your Blackbeard based on real history?
Oh, I think very little. In the story, there is this struggle to possess this chronometer which measures longitude which will, if Blackbeard has it, make it quite impossible for the English and the Spanish — among others — to operate. If Blackbeard has it he can operate with impunity. But really with something like this, it’s pretty pure fiction. The series has several robust female roles, which is a bit of a surprise for a swashbuckling drama.
Blackbeard’s principal female relationship is with Selima, who’s a kind of soothsayer, intellectual and spiritual and strategic conseiller… Their relationship is quite interesting and develops maybe differently than one would expect over the course of the 10 [episodes]. There are three very good female characers. Strong and well written. I would imagine to be a woman in that world, you’d have to be rugged. [Smiles]

In the first episode, we see Blackbeard suffering a debilitating headache. Does that continue through the season?
It’s quite important in the end and is developed in the end. I can only say that Lowe uses that to his advantage, and the migraines may very well be psychosomatic or they may not be. And Blackbeard is a profoundly emotionally haunted figure, which also is developed.

He also has a vision of a ghostly woman in that episode. Will we find out who she is?
Very much.

Say Crossbones is a success, and NBC wants you back for another season or another project. Would that be something you entertain?
I always told [Cross] during [production], if for some reason it did well and for some reason they wanted my character back and me playing that character, I’d certainly listen. I don’t know if I would do it or not, but I would have no problem listening to what they had to say.