Supernatural has traveled to the past, the apocalyptic future and even to its own set. But on this Tuesday’s episode (The CW, 9/8c), the Winchesters encounter their strangest world yet — Oz.

With the fantastical Dorothy (guest star Tiio Horn, Hemlock Grove) — and a witch! — on the loose in Dean and Sam’s home base, the adventure harkens back to the series’ roots, says star Jared Padalecki. The episode also grows the world of the Men of Letters (check out our set photos for a special tour).

“This is what kind of stuff really excites me – these fun, little ways we can tie [in] real pop culture or real urban legends, kind of how the show started,” Padalecki explained when TVLine visited the show’s Vancouver set.

Below, Padalecki and Jensen Ackles reveal what you need to know about the oz-some installment, which also features the return of Felicia Day’s hacker extraordinaire Charlie.

DING-DONG, THE WITCH IS LOOSE! | “We find out that Dorothy’s been trapped in the Men of Letters bunker for a long, long time,” previews Padalecki. “Accidentally, she’s set free, but so is the witch [played by Maya Massar, Caprica]. So we have them running around our bunker. We have to employ the help of the coolest computer nerd we know to help us figure out what happened. Enter Charlie, who’s awesome. That was a really fun episode.”

FRIEND OF DOROTHY | While “Dean tries to battle with the fact that there’s an actual Wizard of Oz and Dorothy,” per Ackles, Sam finds a person he can confide in. “He gets someone to play off because there are parts where [the four of us] have to split up,” describes Padalecki. “Dean and Charlie head one way, and Dorothy and I head another way. We also get to see into Sam’s psyche a little bit. He opens up to Dorothy in ways he wouldn’t have opened up to Dean or Charlie or Crowley or Kevin or Cas. He gets to tell her things [because] he knows she’s not going to be around the next week.”

FLIRT ON | “Charlie has probably the most memorable reaction” to Dorothy’s presence, teases Padalecki. Adds Ackles: “Charlie takes more of the [seductive], ‘Hello’ [approach], which is amazing because Felicia plays that great.” Meanwhile, the Winchesters are more level-headed and thinking, “‘Cool. Crazy. How do we fix it?’” says Padalecki. “The guys are like, ‘We have a witch running wild in our bunker.’ And obviously, we have the King of Hell in our bunker, as well, so we don’t want them to [meet].”

DUDE, WHERE’S THEIR CAR? | With the thought-to-be fictional figures running amok, the Men of Letters set was built out to include a lot of new spaces, including a garage, which made Ackles very happy. “I’ve been begging for that ever since we introduced the Men of Letters because it’s like, ‘Come on, really? We’re just leaving the impala parked out on the street, covering it up with some bushes and stuff?’” he says. “Baby’s finally got some place to sleep. Now we’ve finally got a kitchen. We’ve got more bedrooms. We’ve got a computer room.” Adds Padalecki: “It’s become a nice home for Jensen and Jared to have while filming.”

Check out TVLine’s pictures of Ackles and Padalecki’s on-set abode below. 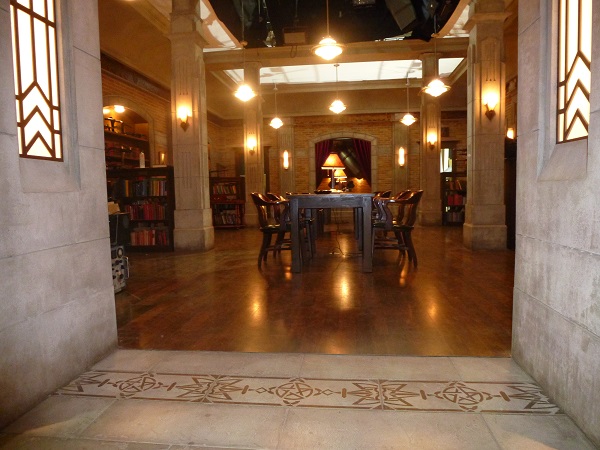