Whether Mad Men‘s Bob Benson is an earnest do-gooder or a nefarious weasel is as contentious a debate as whether to sell margarine based on cost or taste.

Though he’s been on the fringe of the action since his introduction in the Season 6 premiere, the new accounts guy (played by James Wolk) is all Mad fans want to talk about. (Well, him and the “Will Megan meet Sharon Tate’s fate?” question.)

Theories on Benson’s true identity – government spy? undercover reporter? Don’s illegitimate son? – abound. And while we’re not yet sure exactly why he’s turned up at Sterling Cooper Draper Pryce Cutler Gleason Chaough Or Whatever They’ll Eventually Call It, we’ve noticed that Benson is a keen observer at life within the firm.

Well, guess what, Bob? We’ve been keeping close tabs on you, too.

RELATED | Hot for Summer: Your Guide to 125 Upcoming Premiere and Finale Dates

TVLine has monitored the mysterious Mad man’s activities for the season to date, and the gallery below presents his whereabouts in each episode – along with what he appears to be saying/doing in the scene… and what we imagine he’s actually thinking.

We think we’ve caught the big stuff (and most of the small stuff), but the dude is cagey; if we missed any key Bob Benson moment, shout it out in the comments. And while you’re there, make sure to log your thoughts on the ad-agency newbie, as well as any alternate theories on what brings him to Madison Avenue in the late ’60s.

Follow @kimroots
If you like TVLine, you'll LOVE our email news alerts! Click here to subscribe.
Mad Men's Bob Benson: Good Guy, or Some Kind of Spy? View the Evidence and Make the Call 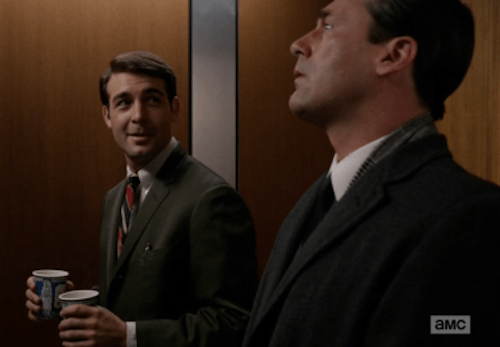