We don’t wanna rush the holidays and all, but can 2013 get here now? Because, as you’ll see in the new photos below, the next two episodes of Revenge look good.

“Power,” the ABC drama’s Jan. 6 episode (9/8c) finds Emily and Aiden getting close on a beach — though it kinda looks like she tackles him before they kiss. During the hour, we’ll also find out that Victoria’s got a scheme that now involves her former almost-daughter-in-law!

Elsewhere in the episode, Declan discovers something that may threaten The Stowaway’s future. We may be worrywarts, but don’t these pics make it look like something catastrophic has happened at the Porters’ home and workplace? Maybe that’s why there’s a law enforcement official in the mix?

In the following week’s episode, “Sabotage,” Daniel and Emily share some wine, and it certainly looks like the pair are enjoying each other’s company. Could this be part of Victoria’s plan — or a direct violation of it?

Click through the gallery, then hit the comments: What do you think will happen when Revenge returns from winter break?

If you like TVLine, you'll LOVE our weekly newsletter. Click here to subscribe.
Revenge Hot Shots: Emily Cozies Up to Aiden and Daniel - and What's Going On at The Stowaway? 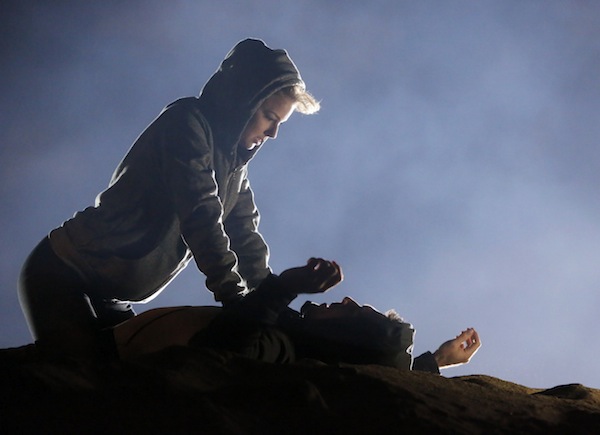