The Winchesters isn’t setting out to rewrite John and Mary’s past, despite what appears to be a mythology-bending premise.

Premiering Tuesday at 8/7c on The CW, the Supernatural prequel follows Dean and Sam’s parents (played by The In Between‘s Drake Rodger and American Housewife‘s Meg Donnelly) as they fall in love and hunt monsters together in the 1970s. But the question that’s been on every Supernatural fan’s mind since the spinoff was first announced is: How is that possible, given that the mothership series told us that John only learned of demons after Mary died?!

While The Winchesters “definitely takes a different road,” writer/showrunner Robbie Thompson assures TVLine, “We are acutely aware of all the continuity, obviously, of Supernatural, but also how we’re deviating from it, and it’s all part of the story that we’re telling. We are going to resolve these issues in this first season. But what I can guarantee folks is we are definitely aware of those things, and none of this, if we’ve done our jobs right, is going to rewrite any of the past. It’ll all sort of be explained, though, as part of the mystery of our first season.” 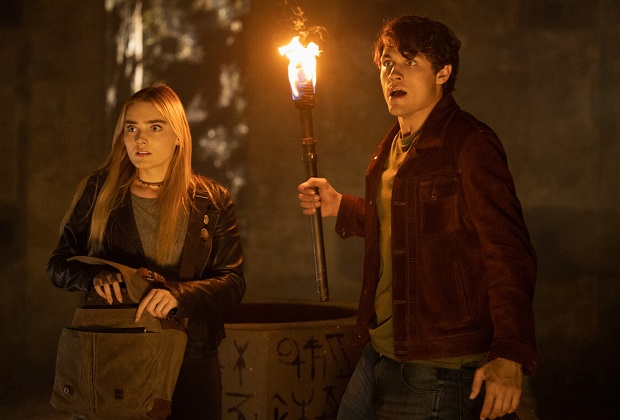 Jensen Ackles, who serves as an executive producer on the spinoff alongside his wife Danneel Ackles and narrates as Dean Winchester, also expressed his desire to not change history during a recent virtual panel for the show.

“We don’t want the picture of Dean and Sam to start being erased,” Ackles said. “This is not what we’ve set out to do. We’re trying to preserve everything that we possibly can on the mothership. I think Robbie and his crack team of writers have come up with [a] way of doing that is servicing this show just as much as it will be servicing Supernatural.”

Thompson notes that even though The Winchesters is presenting a different story of how John and Mary met, the characters still have the same essence of the ones viewers got to know on Supernatural.

“John is still somebody who’s troubled by his past, and some of that is the recent past of his experience in Vietnam, and then some of that is, from his perspective, losing his dad at a young age, or at least his dad being out of the picture from a young age,” Thompson shares. “And Mary is still dealing with the fact that she was born into a world where she was sort of drafted into a war she had no choice to be a part of.”

For Thompson, getting to really dig into Dean and Sam’s parents was one of the main things that drew him to the project when Jensen and Danneel Ackles presented it to him. “John and Mary are really, really fascinating characters,” Thompson says. “When I left Supernatural at the end of Season 11, they were just bringing Mary back into the story, and one of the regrets I had from walking away was like, oh, I really wanted a chance to write that character.”

Read on as Thompson and Jensen Ackles detail what else you need to know about the spinoff, including whether we’ll see some Supernatural vets and just what made Rodger and Donnelly the perfect John and Mary.