The Neighborhood is returning to its roots and embracing change in Season 5, with new showrunners (and seasoned sitcom vets) Mike Schiff and Bill Martin at the helm of Cedric the Entertainer’s CBS comedy.

“With the season opener, what we immediately glommed onto was that the show is called The Neighborhood,” Schiff tells TVLine. “There are a lot of comedies that have living rooms, but this show has the houses, the front yards,” and most importantly, a sense of community, “so let’s re-embrace that element of the show.”

Schiff and Martin — whose extensive resumes include 3rd Rock From the Sun, The Unicorn and Cedric the Entertainer’s previous sitcom, TV Land’s The Soul Man — take over for Meg DeLoatch, who succeeded series creator Jim Reynolds ahead of Season 4. But a year later, DeLoatch departed the sitcom for reasons unknown, at which point Schiff and Martin were afforded the opportunity to reunite with their former star. 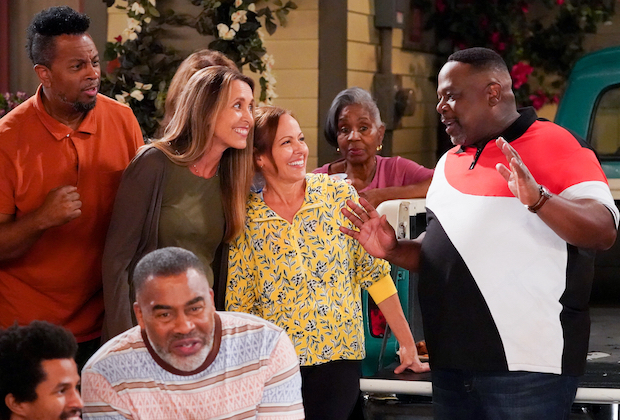 “The thought of joining somebody else’s show in the middle [was challenging],” Schiff admits. “If it hadn’t come with Cedric attached, it would not have been the immediate yes that it was. We just loved working with the guy back at TV Land. There, too, we came in following several other showrunners.

“We’re playing with other people’s characters and a premise that existed before we showed up,” Schiff points out. “We can’t write Jim Reynolds’ version of The Neighborhood, and we can’t write Meg DeLoatch’s version of The Neighborhood. All we can write is what we think will be funny, [but] I think people turning on the show will see the same show they’ve loved until now.”

Viewers will get their first taste of Schiff and Martin’s writing with the Monday, Sept. 19 premiere, in which Dave decides to disconnect the Johnson home from the grid and inadvertently causes a community-wide power outage — which, naturally, incenses Calvin. Watch an exclusive sneak peek above.

“The thing about Dave is that he doesn’t just like his solar power, he likes to talk about his solar power, and how we’re all prisoners to the grid,” Schiff says with a laugh. “In terms of Calvin, those panels on Dave’s roof are one more reminder that the world is changing in ways he doesn’t like. But once the power is out and everyone comes together, it’s about Calvin rediscovering the spirit of the neighborhood that he loved.”

Below, Schiff and Martin preview what else they have in store for Calvin & Co in Season 5.