No matter how hot it gets this summer, AMC intends to give you chills. On Monday, the network announced that Tales of The Walking Dead will premiere on Sunday, Aug. 14, at 9/8c. 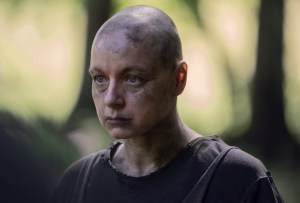 Since Samantha Morton is among the lineup, too, looks like we’ll be getting an episode that tells the backstory of Alpha, the Whisperers’ merciless leader who terrorized our protagonists in Seasons 9 and 10.

Per the official logline for the show, which was created by Walking Dead vet Channing Powell, it is “focused on both new and established characters within the walker apocalypse. Each episode has its own distinct tone and point of view — but the stakes are high in each story, pushing new, indelible characters with relentless, life-threatening choices and situations. We get to see the apocalypse through different eyes, discovering more worlds, mythos and mysteries of the Walking Dead.”

Keep scrolling to take a peek at the first photos from the series, one of three new spinoffs of the long-running AMC drama, which wrapped Part 2 of its three-part final season in April. (As yet, there is no premiere date for the last eight episodes.) The other new iterations of The Walking Dead are a Daryl-centric offshoot starring Norman Reedus (and no longer including Melissa McBride as Carol) and Isle of the Dead, which follows Jeffrey Dean Morgan’s Negan and Lauren Cohan’s Maggie to Manhattan (and is set to premiere in 2023).