People aren’t often appreciated the way they should be until they’re gone. While Kelli (played by the brilliant Natasha Rothwell) is still very much alive on HBO’s Emmy winning-comedy Insecure, her alma mater Stanford University mistakenly listed her as deceased at her 10-year college reunion.

Although Kelli initially laughed off the faux pas during the Season 5 premiere, each “in memoriam” and passing comment frustrated her more. Eventually, Kelli felt like the world — and even her friends — saw her simply as a comic foil whose sole purpose in life was to make them laugh. 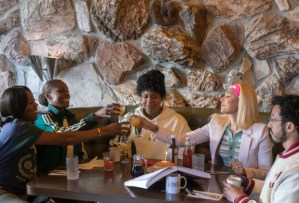 At first, Tiffany, Issa and Molly didn’t understand how much being misclassified as dead bothered poor Kelli. But when they finally did, the trio paid tribute to Kelli by creating a eulogy at brunch that perfectly captured all of the wonderful things she brought to their lives and how extraordinary she is as a friend.

The tribute moved Kelli to tears, and when she lifted her mimosa in celebration, she promised her girls that she isn’t going anywhere.

Just like Issa and friends, we at TVLine think Kelli deserves her flowers now. We also agree with fans on Twitter who say Kelli should get her own spinoff when Season 5 wraps up as the show’s last. Until that spinoff does or doesn’t come, here are five memories of Kelli we will always hold near and dear. Salut!