As the broadcast networks one by one divulged their game plans for the Fall TV season, questions upon questions a-piled up in the TVLine staff’s collective noggin. Now it is time to share them with you, as we do every year. 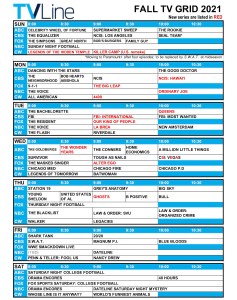 Taking a look at TVLine’s world-class, always-handy Fall TV grid (at right, click to zoom), you yourself can get a refresher on what is airing when, and against what. Of course, the fall’s biggest question is regarding TV’s most watched drama, CBS’ NCIS, and how Gibbs’ team will weather their first time slot change in… ever.

We also had to wonder about NBC’s decision to plug a Thursday hole, eventually, with The Blacklist instead of giving a beloved, long-MIA show’s farewell run its due.

But not all of our queries are about debatable scheduling decisions. We also take issue with the title of one new show, ask if James Wolk might be feeling deja vu, and invite speculation about NBC’s post-Super Bowl plan, which surely will be announced in the fall.

Review our burning Qs below, then hit the Comments with your best answers — or add fresh questions of your own!