“Every day is not just a rehearsal for The Nutcracker. It’s a rehearsal for the rest of your life,” Debbie Allen emphatically tells dance students in Netflix’s new special, Dance Dreams: The Hot Chocolate Nutcracker. And don’t be surprised if you, the viewer, don’t also pull up a little straighter upon hearing her impassioned advice.

After all, Allen has made a career of being a formidable presence in front of — and behind — the camera over the course of her more than 40 years on the small screen, and that voice is one that commands attention. Whether it’s as a fierce force in Fame or as a Different World truth-teller, the Emmy-winning actress, producer, director and choreographer has a certain gravitas that commands your attention. 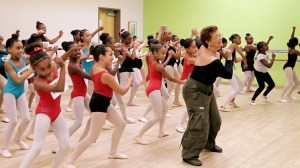 To mark Friday’s release of Dance Dreams — a Shondaland-produced special that documents the lead-up to Allen’s annual Christmas spectacle, featuring students at her academy as well as professional dancers and some other famous faces — we asked her to look back at some of her TV roles. From Good Times to Grey’s Anatomy, she waxed nostalgic about the gigs that built her career.

Scroll down to see what Allen had to say, then hit the comments with your favorite memories of her performances!