The deuces were indeed wild during Thursday’s back-to-back episodes of Brooklyn Nine-Nine, as Jake came face to face with the criminal mastermind he’d previously deemed his archnemesis.

In the second episode, titled “Balancing,” Jake and Charles were on the hunt for Peralta’s “white whale,” serial killer Johnny Franzia. Amy, meanwhile, was set to pitch the Nine-Nine’s new pilot program: a reimagining of how the NYPD’s uniformed officers should be deployed, which was conceived in the wake of the previous episode’s “Blue Flu” outbreak. (As Holt laid out for O’Sullivan, fewer uniformed officers on the street led to fewer bad arrests made, fewer complaints filed against the NYPD, and fewer cases thrown out at arraignment due to insufficient evidence.) 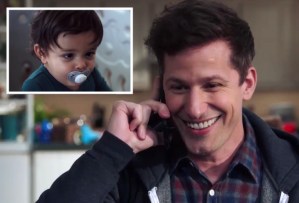 Amid their busy schedules, Jake and Amy needed a babysitter for Mac and conducted interviews in the interrogation room. Little did they know that among the prospective sitters was the elusive Franzia, who brought Mac a stuffed lion he’d implanted with a microphone in order to stay one step ahead of Peralta and Boyle. Boyle ultimately made the arrest without his BFF, who agreed to stay home with Mac while Amy made her big pitch to NYPD higher-ups. But as a result, Jake got to witness his son lift himself up for the first time, which was just about the most precious thing we’ve ever seen.

The return (and subsequent arrest) of Jake’s “white whale” was one of several callbacks to previous episodes of the Fox-turned-NBC comedy, with references dating as far back as Season 2. Scroll down to see if you missed any of ’em — if available, we included video of the original scenes being referenced — then hit the comments with your thoughts on Episodes 3 and 4 of B99‘s victory lap.