This week on Brooklyn Nine-Nine, Amy learned the results of her sergeant exam and Captain Holt took a stand against sexism in yet another standout episode in an already exemplary season.

The installment began with Amy finding out that she passed the aforementioned exam — cue her signature dork dance! To mark the occasion, Jake surprised his fiancee with one last case for them to work together before her big promotion: an investigation into a series of fires connected to her favorite crossword puzzle author Vin Stermley — played by none other than Fumero’s former One Life to Live costar-turned-real-life husband David Fumero. 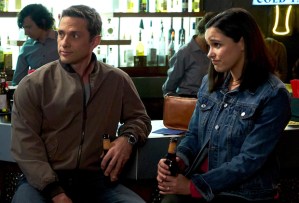 I’ll admit, from the moment Vin walked into the precinct, I assumed two things: 1) That most of the episode would be about Amy fangirling over Vin, just to make sure the stunt casting didn’t fly over the audience’s head, and 2) that Vin was the serial arsonist. Suffice it to say, I was wrong on both counts. Not only did the episode avoid winking at the audience, but Vin was innocent. An obsessed fan who attended his “puz’ hang” was the culprit.

Jake being jealous of Vin was to be expected (this is a sitcom, after all), but admitting to Amy why he was insecure led to a great couple moment. He told his fiancée about his concern that she’d one day wake up next to him and regret not marrying someone smarter. Amy assured Jake that he had no reason to be jealous because she’s already got someone who’s just as smart as she is: “You’re a brilliant detective,” she said, and “I love the way you think. That’s why I want to marry you.” (D’aw!) 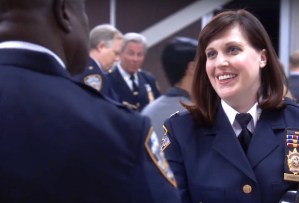 Then there was this week’s B-plot, featuring the great Allison Tolman (Fargo) as Capt. Olivia Crawford, Capt. Holt’s newest competition for the NYPD commissioner gig. The show has never shied away from how difficult it was for Holt to rise through the ranks as an openly gay cop, and to see him speak out after the head of the selection committee admitted that they had no intention of appointing a woman for the job was immensely satisfying. Crawford eventually came around to thank Holt for putting his own potential promotion on the line, and to officially declare the 99th precinct’s captain her frenemy. The promise of more appearances by Tolman makes this Fargo fan verrrrrry happy.

What did you think of this week’s Brooklyn Nine-Nine? Drop a comment below.